We are saved--so our politicians tell us--from a plunge off the fiscal cliff. In all reports, however, it is mentioned that President Obama settled for a slice of what he claimed to be after, which was to raise taxes on those whose income is more than a quarter million annually. Instead, the Republican bravehearts kept that rapacious goal at bay and made certain that taxes would only increase for those making more than $400,000 per year. Brilliant! 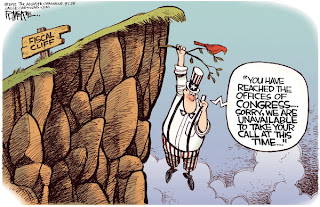 According to media reports, the only actual spending cuts contemplated were those that would affect luxuries for the average person, such as Social Security benefits or medical care for the elderly or disabled. That's the spirit, boys!

It's important that the American media avoid all mention of the Pentagon budget and how each $billion cut there would free enough funds to create a net gain of thousands of jobs. Instead, it's crucial to take all Pentagon claims without factchecking, and convince the American people that the slightest cut to DOD would slash jobs wholesale and strip body armor off US troops and leave them driving used Ford Festivas. Framing any threat to Pentagon funding as seditious is key.

Do not repeat not mention that the nuclear arsenal, for instance, provides the US with no usable defensive options and above all avoid any writing that calculates the projected increases of some $600 billion in upgrading those nukes over the next decade. This is not the time to question the value in threatening the unthinkable and certainly not the time to release the figures on what some say could be saved by starting to mothball these weapons. Ignore any exceptions to this guideline and do not cite any reports that show which nuclear weapons contractors lobby and contribute to which politicians.

Thank you, politicians and mainstream corporate media, for your careful framing of these Big Issues so that we, the dumb apathetic citizenry, can proceed with our credit card shopping in anticipation of the next national holiday. Don't we all gain 10 lbs. each MLK Day?
Posted by Tom H. Hastings at 10:55 PM No comments: