A novel approach to nonviolence: The Dandelion Insurrection 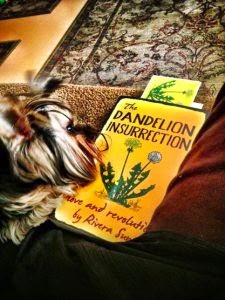 There are three types of novels about nonviolent power.

One, the sort that is essentially magickal, wherein nonviolence works because the author dreams it so, in a world that we all know would be so so nice but which is fantasy, a bit of "wet panties peace fancy." Walker.

Two, the kind that seems to claim real strategic power for nonviolence, but which uses violent threat as a sort of dark deus ex machina, a kind of "better agree with Martin or you're stuck with Malcolm" story, showing great imagination right up to the line of scrimmage and then bringing in the "realism" of violent insinuation. Callenbach. Starhawk.

Three, a tale that could well be quite real, based on the sort of Atwoodian extrapolative fiction and then the application of proven strategic nonviolent elements parachuted into a dystopian world ripe for either fatalistic surrender or go-for-broke unarmed revolution.

I've been waiting for that third category for decades, repeatedly disappointed, wondering if anyone would grow the chops for the task. Now, happily, Rivera Sun (who grew up during my waiting years) gives us this novel in this new genre. It is a masterpeace.

A young writer, Sun nevertheless rivals Kingsolver in her command over poetic use of figures of speech, action verbs, storyline coherence, and surpasses so many in her distinctive trilingual use of French, Spanish, and English--but which is eminently understandable to the essential American readers (monolingual American being a redundancy).

When corporations own government, when speech is no longer free, when work camps succeed the prisons, and when we have a real security state (in other words, about a half-step logically downward along our current slippery slope), we will have a fertile ground for uprising. Will it be a Tea Party Revolution in league with a Sagebrush Rebellion--an armed insurgency? Sun has other ideas and hers are the new domestic realpolitik. She foresees nonviolent force, building from a combination of experiential knowledge gained from our many cases with all their lessons learned and fed by an American sensibility of freedom and innovation.

The Man from the North produces his writings that touch people. He is nearly myth, but Sun lets us meet him. He's just a guy with a gift.

Zadie is his beautiful former sex worker romantic dream girl whose idealism matches his. Where he is at a loss, she is most effective. Where she cannot make progress, his talents move it forward.

Along the way, the people who have so many special talents enable the growing influence of their Dandelion Insurrection to waft on the breezes of rebellious communication and collaboration across the country, taking root in some fashion wherever they alight.

Can nonviolence save the US? Can we ever imagine that brown, black, white, red Americans could band together and end the slide into a corporatacracy of violence and destructive extraction?

Hint: Yes, and this story is the first realistic version. Sun uses the knowledge generated by the Civil Rights Movement, Gandhian actions, the Serb revolution, Cesar Chavez, Arab Spring, Serpaj, the colored revolutions, Gene Sharp, Stephen Zunes, Hardy Merriman, Jack DuVall, Maria Stephan, and Erica Chenoweth without every once straying into pedantic hortatory. The novel retains its imaginative storyline with an andragogical style so hidden it never gets in the way.

Get it. Give it. Lift it, hold it, blow its seeds to the winds of your social surroundings and allow the knowledge to ride wherever, to sprout all around us. Secret: you can get a signed copy by skipping the giant corporate bookstores and dealing directly: http://www.riverasun.com
Posted by Tom H. Hastings at 2:52 PM No comments: