Many activities potentially fall under the rubric of police liaison work. Some campaigns use none, or some, or all of these components.
·      Reaching out to police or other armed agents of the state to inform them that an event will occur.
·      Negotiating with armed agents of the state.
·      Requesting police presence.
·      Requesting police not be armed.
·      Requesting police not be present.
·      Requesting police escort.
·      Requesting police protection.
·      Defining the roles and Code of Nonviolent Conduct of the movement, the resisters, the participants, and the peace team so police are informed.
There are reasons, in general, to do one or more of these activities, and at times those reasons vary with local or state history, quality of relationships, presence of violent counter-demonstrators, or other concerns.
It is crucial to establish several factors to the police if there is liaison work:
·      All participants in the campaign comport themselves in adherence to the Code of Nonviolent Conduct agreed upon by the movement. Anyone not doing so is not a part of the campaign.
·      The peace team will attempt to de-escalate all conflict that is violent or threatens to become violent. This includes police violence to anyone. While we do not do so physically, we will make all other attempts that seem reasonably possible.
·      No one in the campaign, including the peace team, will inform to the police on unlawful actions that may occur by any party in the course of the event. The peace team is not a part of the police, not agents of the police, not the “eyes and ears” of the police, only an internal team working to preserve public safety in general and the nonviolent image of the movement in particular.
At times the role of police liaison is given over, with guidelines, to the peace team. It is not advisable to have off-the-record communications with any armed agents of the state; movement leadership must be given reports of all salient elements of any communications with police. Ideally, all participants should know germane particulars of any caveats or expectations about police in advance of any action.
There are advantages and disadvantages to such liaison work. Some disadvantages:
·      Movement members who have legitimate distrust or fear of police may transfer some of that distrust and alienation to the campaign.
·      Police may interfere with plans that otherwise would have been doable and successful.
·      Police may incorrectly regard the peace team as their agents.
Some advantages:
·      If better communications result in higher credibility a more relaxed police presence, brutality and interference may be mitigated or eliminated.
·      If police feel they are not going to be attacked by anyone associated with the movement, and if there is no property destruction or unpermitted road/transit blockage, they may be gradually eased further and further back.
·      If not immediately, at some point the campaign may be able to negotiate specifics such as no profiling, no dogs, no riot gear, no rough treatment, no interference in assembly and other harsh or unhelpful police practices. 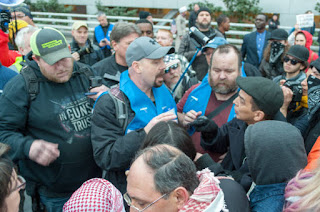 a couple of thoughts.
I love the picture, very handsome men in the blue vests!
I like that you recognize a broad spectrum of interactions with the police. It is important to have a working relationship of some sort with any agent of the state, especially ones carrying firearms!
I would love for you to do a post sometime on how to word a "non violent contract" for an event. something that explains what is asked and I, as an event organizer could crib and paste my name at the top and get everyone on board. The times I have had them in hand when dealing with police interaction it really has made a difference!

Dear HIPster, OK, I'm on assignment! Will do once a couple other brushfires are less wild...thanks!

Too late! You are now known as HIPster!