That great peace analyst Eddie Murphy said it all in a bit from many years ago, in which he wondered why white folks stay in obviously haunted houses. He mimics how he would act coming into a beautiful old house, praising it to his wife, when suddenly a ghost says, Get out, and he instantly says, Too bad we can't stay, Baby. 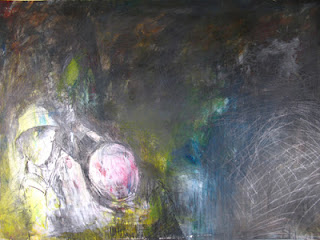 The ghosts of Iraq clearly possessed the mind of Army Staff Sgt. Robert Bales, the alleged murderer of 16 civilians, mostly children, in a village in Afghanistan. He said he didn't want to go back to war after multiple tours in Iraq. Now the ghosts of Afghanistan's victims can be heard telling US, if we listen even a little, Get Out.

Oh, sure. JBLM is right on track for the results of a militarized society.

And from the same Seattle paper:
"The troubles at the base this week, in addition to news of the Afghan murders, also included the arrest of a Lewis-McChord lieutenant colonel charged with threatening to kill his estranged wife, girlfriend and commander and threatening to blow up the U.S. capitol. In Olympia, a private from the base was stabbed to death."

Our nation needs to declare peace and Just Come Home and Heal. A culture that sees returning vets shooting park rangers and beating wives and children is a war culture far too long. We are reaching a point of near desperation for peace, for a cessation of all military adventures.

Now. The ghosts in our homes, in our workplaces, sleeping under our bridges, and in our classrooms are clamoring, and we need to Get Out and think about how to transition to a culture that doesn't create these haunting ghosts of war.
Posted by Tom H. Hastings at 4:02 PM 2 comments: