Guns are not sacred, children are

It is now long long past time to repeal the Second Amendment. It serves evil, not good, violence, not peace, hatred, not love. The Second Amendment to the US Constitution is a relic of a time when the citizens accepted their general powerlessness and seemed to live without imagination, just fear. 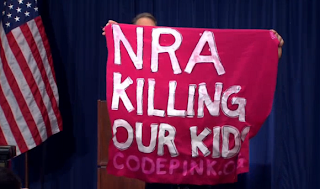 I'm a peace person, as are my friends. I am striving to be nonviolent and have tried to learn nonviolence for years. I can point to alternatives to guns, I can argue against them, and that's about it. What we need--what would dramatically change our national discourse on this--is for gun owners to stand up and tell the rest of us, "We no longer want our possessions to be regarded under our Constitution as sacred and above the law. We reject the kneejerk response from the NRA and the gun industry every time there is a tragedy. Not once--never, ever one single time--have they admitted that guns can ever be a problem and are just things that should be subjected to laws like anything else."
When I worked on high-rise construction projects in my 20s and 30s I was very glad for OSHA. They inspected just often enough to help us stay relatively safe, even 300+ feet off the ground in the Minnesota winter. We didn't have company owners lobbying to declare scaffolding or tie-ropes or other safety devices somehow related to near sacralization. The OSHA inspectors would pick up a faulty extension cord, pull out their wire snips, and cut it into short, unusable pieces, and would then write up a fine. Did that cost our companies? Only once--then they told the foremen to be careful to keep it all legal.

We regulate cars, motorcycles, boats, and much much more. Some things are simply outlawed. People cannot have a marijuana brownie but they can have a handgun?

The lives of children are sacred; guns are just objects. We choose guns over children every day that we do not get rid of that long-antiquated Second Amendment.

Am I suggesting ridding ourselves of the Second Amendment would solve everything? Obviously not; guns haven't solved much either. We need to learn new ways.

Learn nonviolence. Work to end poverty. Share. Support candidates who will reduce military expenditures and increase subsidies to all the many new ways to manage conflict that do not involve violence and the threat of violence. Learn about Gandhi. Learn about mediation. Learn about de-escalation. These are how we negate the "need" for guns. Are they foolproof? Nothing is. But the Second Amendment is not serving us well, not at all. Time for change.
Posted by Tom H. Hastings at 7:54 PM No comments: