The United States fancies itself as the shining light for freedom, as the power on Earth for good, spreading democracy. How does this factcheck?

We spent much of the 19th century spreading US hegemony in several directions, starting with owning slaves and stealing both native lands and Mexican lands, and, toward the end, invading and overthrowing governments in Central America. We only invaded Canada once.

We spent much of the 20th century making the world safe for democracy  whoops US corporations. Mostly, we won--got rid of some threats to US interests who happened to be elected by their people but who were unfriendly to predatory capitalism. Mohammed Mossaddegh in Iran, Jacobo Arbenz in Guatemala, Patrice Lumumba in Congo, Salvador Allende in Chile come to mind. These are the sorts of cases that make the world somewhat suspicious and of course the illegal, immoral invasion of Iraq based on two Big Lies feed into that mistrust.

Why, then, would the Obama administration, in the person of John Kerry, offer to assist the Free Syrian Army? It looks like it fits the pattern, the Yes-he's-a-son-of-a-bitch-but-he's-our-son-of-a-bitch routine, where we pick an armed thug or a bunch of them, give them weapons and training, and expect them to be US-corporate-friendly at the end of the day, plus providing war profiteers upfront profits immediately by grabbing US taxpayer money, shoveling it into the accounts of corporations. Which corporations? All corporations. Seriously. (pictured: John's buddies) 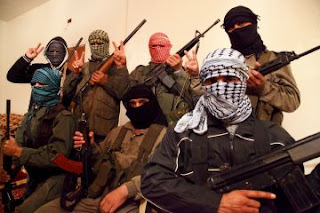 Just a tiny example, only a couple of brief notes from just one day of Pentagon contracts, from Friday, March 1, only a select few:
There were more, of course. I mean, when you are tasked with spending a half a $trillion each year, you need to keep it flowing out and flowing heavy in many directions. You'll hear nothing but dire threat complaining from the military about their budget, of course--if a general fails to kvetch they can find another who will.  Really, however, when will it finally become poor form to talk poor mouth with their mouths full?

Creating conflict, nurturing threat, all requires violence capacity-building, and John Kerry is fitting right into that groove right away. The results will be fabulous, no doubt. The contracts for more non lethal military aid to the Free Syrian Army will begin to appear in the DOD daily contract listings and already, just on the great news of Kerry's support, the FSA is promising to widen the war into Lebanon and, while they are at it, Iraq! Nice going, John! We've done so so much to help inflame hatred and violence between Shia and Sunni in Iraq and now you've helped spread that more assuredly and now violently into Syria and Lebanon--and doubling back on Iraq yet again. What a Secretary of State.

President Obama, are you paying any attention to John? There are Syrians who still believe in nonviolence, know how to wage a nonviolent campaign, and every time we pay attention and pay money to the violent rebels we make it all worse. You thought it couldn't get worse? It's about to, thanks to US help. State Department should be about spreading real democracy, about enlightenment, about reason and rational discourse and indigenous decision, not about military aid to the least worst armed bunch.
Posted by Tom H. Hastings at 9:11 AM No comments:

The US media has been especially emetic recently in their coverage of the sequester. While cuts to human services, education, health care, and environmental protection are huge, most of the stories are all about how this will hurt the military, will threaten our national security, will ripple out into the civilian world, and woe woe woe. Really?

How is it, then, that John Kerry has just promised $60 million in starter funds plus more "non lethal" aid to the Free Syrian Army, the irregulars in Syria who are mirroring some of the worst of the Assad regime? The FSA has tortured, killed civilians, and shut down all current hope of a nonviolent solution to this civil war. John! Where is that $60 million coming from? Do they let you just walk into the printing room at the US Dept of Treasury and grab a suitcase full? Who do you think is going to pay for it, now that the budget is sequestered and all we hear is whining from the military and their media buds? At least Fox News is your new BFF, eh? 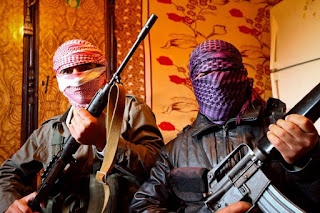 Kerry is talking about sending military vehicles to the FSA while NPR reports from Pentagon spokespeople that the US military--thanks to the sequester--will be short on military vehicles. John! Are you paying attention or are you just paying thugs to continue a violent revolution they hijacked from a very promising nonviolent civil society Arab Spring uprising two years ago?

Syrian and Iranian officials responded predictably, asserting that this aid will only prolong the war, which is almost certainly true. When dictators face elections--as Assad will next year--they usually run out of excuses and lose when they face organized nonviolent civil society opposition, even when they brutally suppress it. This happened to Pinochet, Milosevic, and to hand-picked successors to crime bosses like Kuchma in Ukraine, and yet now we see Bashar al-Assad given the perfect excuse to postpone elections indefinitely and the US is contributing to that.

Yes, the Iranian and Syrian officials are cynical. Syria's Walid al-Moallem and his Iranian counterpart, Ali Akbar Salehi claim that Syria's regime is legitimate and that Syria is a sovereign nation and everyone should shut up about whatever Bashar al-Assad wants to do to his lowly subjects. This is quite 19th-century of them, at best, but when Kerry arranges support for the armed revolution, he is Just So 20th Century. Yes, Assad's sovereignty stops at violations of human rights, but now we know that nonviolent interventions, coupled with support for nonviolent indigenous civil society opposition, work best, and incur lower costs for all parties.

Back when Assad was being terribly brutal toward a mostly nonviolent opposition, Iran criticized him. The foreign minister of Iran, Ali Akbar Salehi told Assad to recognize the legitimate voices of Syrians and even Ahmadinijad said the crackdown should stop (Anderson, 2011). Thanks to the justification provided first by the FSA and now by the USA, Iran has closed ranks and is attacking the US. This is so unnecessary and so very unhelpful to Syrians (remember them, John?).

If we could apply the sequester double-time to the US military and use a small part of that instead to support nonviolent civilian movements we would repair much of the damage to the US image worldwide even as we would be far far more effective at spreading sustainable democracy.