Fight them there if we want to eventually fight them here

"Bring the fight to them over there or they will bring it to us on our home soil." So say the (and I use this term with all due respect) warmongers whose rationale for bombing and shooting, possibly invading and occupying other peoples' lands is the all purpose fallback to those who know that they are recommending a disastrous policy.

Those are the two options, according to these people. Either we start strafing the enemy or we can hide like cowards and wait for them to sweep across the US. Seriously.

Facile false dichotomies like this are the building blocks for senseless violence, loss of life on all sides, a broken economy (except for war profiteers like Dick Cheney's Halliburton, which netted some $39.5 billion from our 2003-2011 imperial adventure, every cent of which came straight out of the pockets of working Americans), and another round of generating hatred toward the US.

Why do they hate us? Um...because we support their most corrupt leaders, like the Saudi Royals, the Bahraini Royals, and the Egyptian generals? You think? Because we invaded Iraq on two Big Lie pretexts (Saddam had WMD and was buds with bin Laden). Could be, eh?

As usual, the war profiteers--arguably the least patriotic of all Americans, since they routinely send thousands of Americans to their deaths and rob all other sectors of our economy of federal support--are calling for violence. As usual, they are wrong.

They would have us fear that those who are taking over the Sunni Triangle--the Islamic State in Iraq and Syria--have their sights set on the US next. In truth, the only way we can reliably be sure that ISIS will attack the US is to send troops there. They will then attack those US troops. Brilliant. They will do so using US weapons, since we gave so many of them to the Iraqis, stupidly. Why do we leave so many weapons with troops who obviously have zero interest in fighting for the country that foreign invaders have tried to create in their own image? Again, it's profitable to an elite group of war profiteers. Waste is their friend; keep the assembly lines building more, suck more profit from the American taxpayer into the deep pockets of the weapons corporations. Use it all up, even if you have to turn it over to those who will use those weapons against Americans. The only Americans they will use them against--soldiers recruited from the poor and underemployed sectors of the US--will not be those who own the weapons manufacturing corporations, so who cares?

I am not even being cynical in my assertions; this is just reality. What history teaches us is that the Islamic jihadis have many legitimate grievances and eventually attack using terrorist, immoral methods. Why give them more grievances?

The elites in Congress will not change this reality until the citizenry changes Congress. Let's do that.
Posted by Tom H. Hastings at 3:18 PM No comments:

Dear America: It's Over (Rulers of the World Era)

Reinvade, reoccupy, and redestroy Iraq. That is the solution to the inevitable civil war that happens when the US pulls out? Will we do it until either Iraq is remade in our image or until the US economy, political environment, and culture is also destroyed?

Eight years ago a group of Portland peace activists raised the funds to bring together a number of experts to produce an exit strategy from Iraq. Ours was done, as it turns out, at the same time that the Iraq Study Group did their work. We were just unaware that the government had finally at long last decided maybe it was time to think Exit Plan. Duh. I expect we were all simply inspired and challenged by the insightful and cogent strategy published shortly before in the widely cited peer-reviewed journal, The Onion with the supplementary promotion by Bill Maher. 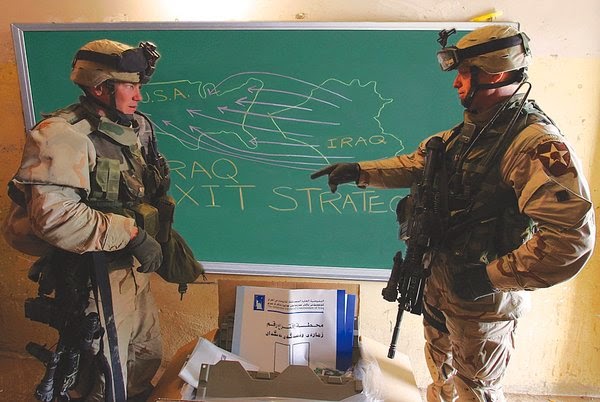 Still, despite the obvious--and our group, which was informed by military experts and conflict transformation experts alike, noted well that no matter when the US left the Iraqis would have a bloody civil war and settle on a new autocratic government that shot its way to power and repressed its citizenry--it took the US three more years to begin to leave, longer to finish leaving, and now the correctly predicted violent settling-out process is happening in earnest.

Naturally, the US conflict industry is dismayed when the US isn't spending every last centavo on weaponry and other military profiteering contracts. Time to respond! Go bomb! Send in "advisers." No-fly attacks, hunt down insurgents with drones and war jets. Remobilize US troops because if there is one glaringly blatant truth, proxy troops no longer work in this post-Cold War era. They seemed to be Just Fine and a great way to drain the American taxpayer when their loyalty was fairly dependable. But the era of "he may be a son of a bitch but he's our son of a bitch" (ascribed a bit dubiously to FDR about our boy Somoza, the Nicaraguan dictator) is over. Our SOBs are now routinely driven from power by the ballot, the bullet, or the bodies--that is, by the elections we no longer control, by violent insurgencies, or by civil society nonviolent revolution.

Stop it. Stop interfering in other countries. Stop sending arms. Stop the drones. Just support civil society with helpful and requested aid, never guns or tanks or war jets or anti-insurgent helicopters or anti-government rocket-propelled grenade launchers. And for any chance of success, keep US troops at home. Let Iraqis work it through and then try to be a friend to their citizenry with our goods of life. It may not be as fast as the "I've got a gun to your head so go vote!" model of spreading "democracy" that is favored by our leaders and our military industrial congressional complex, but it is the only one that actually works. Can we please start now? 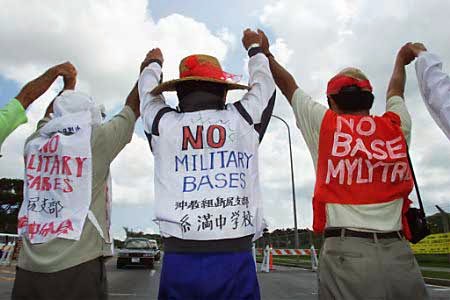 Increasingly, Okinawans resist such arguments. Land usurpation,  sovereignty cancelation, foreigners with guns who commit crimes with legal and extralegal immunity, infernal jet and truck noise at all hours, clogged roads and traffic accidents, human trafficking and military personnel sexual crimes against locals, ruined coastline, contaminated air and water, military aircraft crashes, massive local resource consumption and the endless experience of living under occupation frustrate indigenous Okinawans and they are not alone. Who's watching the watchers? has now become protect us from the protectors.

The latest small but telling twist of profound irony is the discovery that a US Kadena Air Force base building used to screen children for developmental concerns has drinking fountains that have been delivering water-borne lead to those children for many years--even despite reports that the lead content was at unsafe levels in that building more than a decade ago.

A single incident like this is alarming to locals who want the foreigners to leave--isn't 69 years of foreign military occupation enough to assess and neutralize the Okinawans' desire to conquer the world? But this happened at similar buildings on two other US military bases last year in Okinawa. Thanks for your care for the children, US military! Please show even more care and leave, at long last.

It has never stopped hurting Okinawans that they have been repeatedly devastated by foreigners and many even regard Japanese as foreigners. As usual, the UN is far ahead of the US on this question, pointing to history of independence and national separation so profound that even the islands' (an arc of them some 683 miles long) have evolved unique flora and fauna--and human culture.

One of the four primary steps in principled negotiation is to insist on fair standards. This has been a failure at every level of this occupation for nearly 70 years. This small but telling issue of lead in the water (yes, the fountains have been ordered disconnected, presumably by a touchingly sensitive USAF public relations officer) is an example of abuse of those standards. The US Environmental Protection Agency found that there is no safe level of lead in drinking water. No lead at all is the only safe standard. So of course the USAF decided that 20 ppb is a safe standard. The child development buildings had levels even in excess of that manipulated 'safe' standard. This is a bit like the state legislature of Indiana almost declaring a new value for pi in 1897 (3.2, much simpler). Neither that legislature nor the USAF gets to change reality to suit their fancy.

The only thing worse than all the occupation for almost seven decades is the Asian Pivot, sending massive US military forces to that region, presumably to protect everyone from China. It is time to pivot home, to stand down, to close foreign bases and stop polluting everyone else's countries. There is enough remediation to do back here in the US. There are hundreds of US taxpayer $billions to be saved doing this, and a huge amount of goodwill we can generate by closing down, cleaning up, and coming home. It's time.
Posted by Tom H. Hastings at 7:50 AM No comments: