Kerry! We Just Say No!


We now see John Kerry peddling the old brand, War-Lovers Kool-Aid, in his pronouncements that he is going to provide the violent insurgents in Syria with body armor, armored vehicles, military training and other aid. This is how the US operates against the interests of the US voters, citizens, and taxpayers while operating in the interests of the Pentagon private contractors, also known as war profiteers.

This aid will be paid for by the US taxpayers. This aid will come despite bellows from the violent rebels that they are being harmed by a USA which will not give them air support and heavy weapons--guaranteeing that US aid will be scorned and nobody in Syria will be grateful to the US. The body armor may well be worn by insurgents who attack Americans in the future and the armored vehicles may well be driven by those attackers. John Kerry is arranging for the next chapter in Blowback, Chalmer Johnson's exegesis of our tendency to give the guns to those who point them at us later.

Research in my field of Peace and Conflict Studies features some of the complex examinations of the regional conflict formations (RCF) that connect politics, military, religion, economics, and other facets of regional groupings of nations that are often even more connected than, for example, the nations of North America (Leenders, 2007). Do we actually think that military vehicles given to "moderate" violent insurgents in Syria will be received by Arabs unaffected by the hatred we've engendered in Iraq, in Palestine, in the Arab street across the entire region? Are we that naive? Seriously? 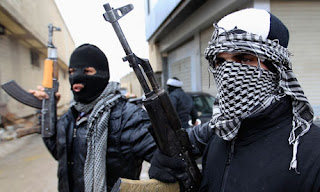 Is this actually the time to tell starving children of the world that we are going to spend our money to distribute military goods, not food? If we really fed children and stopped military aid, would we have more friends and fewer terrorists?

Most of all, the idea that democracy comes at the barrel of a gun is outdated and proven ineffective, if not simply diametrically opposed to real outcomes measured and analyzed over time. This is shown, known and promptly ignored by those far more protective of contractor profits than they are of democracy. We gave support to our favorite violent actors in Libya and we earned the murder of our ambassador as blowback. How long will US citizens, voters and taxpayers go along with this? Perhaps it's time for peace people to join in temporary coalition with the Tea Party who oppose foreign military bases and aid. We can always go back later to insulting each other, but it seems that we have some overlapping goals that could form a basis for success.

Please tell John Kerry and our elected officials that war profiteering is unpatriotic.

Snatching defeat from the jaws of victory

In the early days of Arab Spring the struggles in Tunisia, Egypt, and then Yemen, Bahrain and Syria were all essentially nonviolent. They were also characterized as such by mainstream media worldwide and by observing academic specialists. Indeed, Dr. Chibli Mallet, Visiting Professor in Islamic Legal Studies, Harvard Law School, wrote then, in early 2011, in the journal Middle Eastern Law and Governance:


In Bahrain, Yemen and Syria, the refusal to resort to violence is a conscious choice of hundreds of thousands of people. (p. 136)

It is left to us, some 70,000-75,000 war dead later, to wonder what happened, what bloody happened, to poor poor Syria? Whose bright idea was it to take up arms? Why did that model produce enough of a violent insurgency to overshadow, overwhelm, and occlude the nonviolent launch of the Syrian Arab Spring? The results have been a mortal failure, and are about to become rancidly worse as the US contemplates taking the path demanded by John McCain and his death-specializing friends who own arms manufacturing corporations. We may have the liberal Obama in his lame duck impervious years and his new Secretary of State John Kerry with an ancient history of a few antiwar statements, but McCain is carrying the day, and may as well be boss of Kerry, who is now making all the arrangements, according to the Times of London.

Syrians will suffer more as the US pours arms into the conflagration, but for a US with a profits-before-people culture, we will see the US taxpayer fleeced again and dead Syrians as a direct result. Then we will have heavily armed Islamists in control. Great. I'm sure they will love us, John. 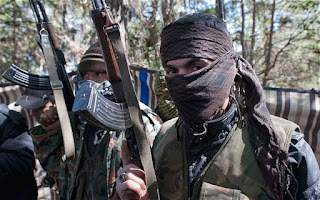 I don't have John's cell phone, nor even his new email. Please consider going to the State Dept website and submit a question. Mine:


How can I convince Sec Kerry to NOT send arms to Syria? The Free Syria Army commits human rights violations almost as often as does the regime. Support nonviolent civil society, not an armed insurgency.

As John Kerry prepares to start arming violent insurgents trying to overthrow Bashar al-Assad in Syria, we on the nonviolent side wonder if this is just one of those wars with no chance for nonviolent solutions. Isn't it a bit like the communists shooting at dictator Ferdinand Marcos in the Philippines in the 1970s and 80s? Isn't it something along the lines of the Serbian dictator Slobodan Milosevic slaughtering civilians as the armed Kosovo Liberation Army fought back hopelessly? Couldn't we say that this is just one of those times that is similar to the civil war in Liberia, with "Christian" dictator Charles Taylor in a death match with the violent warlords in a coalition charmingly calling themselves the Liberians United for Reconciliation and Democracy (LURD)?

Oh, that's right. All these wars were stopped and resolved by nonviolent people power.

In 1989 a civil war began in Liberia, led by Charles Taylor, who had strong relationships to both Moammer Qaddafi and evangelist Pat Robertson. Can you say, "Odd bedfellows?" Both helped fund Taylor's war, Qaddafi by diverting oil funds from Libya and Robertson by purchasing rights to diamond mines in Liberia. Taylor and Samuel Doe and Prince Johnson were among the squabbling leadership and eventually Taylor came out on top, only to find his presidency attacked by a new crop of warlords.

Finally, in 2003, after suffering massacres, rapes, abductions, child soldiering, and the impoverishment of war long enough, the women of Liberia united and stopped that war. They were the ones. They not only brought all parties to the table in Accra, Ghana, they forced them to stop dallying and then they made sure the warlords in the transitional post-Taylor government gave way to the first African woman head of state, Ellen Johnson Sirleaf. Leymah Gbowee (pictured, from Nobel site) and Johnson Sirleaf  received the 2011 Nobel Peace Prize (along with amazing Yemeni Arab Spring organizer Tawakkol Karman) for this remarkable achievement.

Syrian women could end their civil war and topple the Assad regime. Syrian civil society could use nonviolence in a number of ways to finish this horrific war and overthrow this bloody murderous ruling party. Learning from others in similar situations, we can devise our own ways to win without war, to stop wars in their blood-soaked tracks, and to bring peace and justice to our world.

John Kerry should return to his antiwar years and start a new US era of helping nonviolent civil society, not arming those who commit mirror atrocities to the dictators they fight and then establish new dictatorships once they take power.
Posted by Tom H. Hastings at 6:52 AM No comments: