When a dictator (or cop, or boss, or whomever) overpowers you and hurts you, or attacks your friends and harms them, do you react with verbal attack? Do you engage in character assassination? If you do, is that violent or nonviolent?

It is neither. Nonviolent communication is a tough act but it is strategic. Verbally throwing down and launching ad hominem assaults is not violent, but it is not nonviolent. Some analysts call it "not violent," a sort of junk category into which they toss behavior that does not advance a cause, a campaign, or a movement, but is not physically violent. Some call it verbal violence. Whatever we call it, that sort of behavior is not strategic. It tends to produce more oppressive violence and it tends to dry up public sympathy for those who use that sort of pugnacious language.

Nonviolent communication, wrote the late Marshall Rosenberg (2003), "guides us in reframing how we express ourselves and hear others. Instead of habitual, automatic reactions, our words become conscious responses based firmly on awareness of what we are perceiving, feeling, and wanting. We are led to express ourselves with honesty and clarity, while simultaneously paying others a respectful and empathic attention" (p. 3). 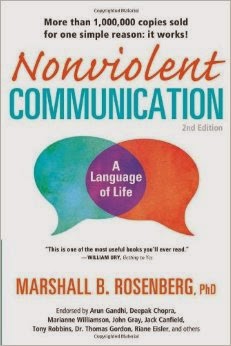 Some of you are naturally great at this. Some of us need daily, even hourly, reminders. I certainly struggle with it when I'm outraged by hurtful conduct. My outrage is proportional to the gap between the level of hurt and the innocence of the victim. That gap is widest and open longest when the response is assertive nonviolent communication. That sympathy gap can shut fast if actual violence is the response but will also narrow significantly if the response is some sort of snarling reaction instead of assertive nonviolent communication.

Do brutes deserve nonviolent communication? Probably not. Do you want to build your movement for justice, for freedom, for environmental protection, for peace? Then be careful not to start closing that gap. The quintessential gap-slam came when the US was attacked on 9.11.01 and pretty much the entire world expressed dismay and sympathy until 7 October when the empire struck back. Since then it's been all downhill to ISIS. On a smaller but quite important scale, we saw the sympathy gap narrow significantly after the Ferguson, Missouri policeman murdered Michael Brown and nonviolent protests gave way to riots. The sympathy gap took a big hit in the Eric Garner chokehold murder when two NYPD officers were in turn murdered by an African American fellow who used social media before the murders to establish his motive and intent as related to the uprising against police violence.

Direct violence is the fastest and most certain way to smash the sympathy, but even verbal violence--even just hate-filled facial expressions and angry chanting--will start to close that gap and that gap is always directly related to recruitment of both supporters and activists. Using anything but strategically sound nonviolent communication is like leaving power and influence on the table. Someone else will grab it. Don't let them.

When I was just 13 years old, I started refusing to go to church with my mother and sisters. It was a church I had gone to all my young life. I had prayed hard. A lot. I tried to believe. It was, in my young eyes, just hypocritical. Later, I would come to call it a bizarre cult. I was raised Christian Scientist, following Mary Baker Eddy. The entire experience was due to my great grandmother, at age 16--who was born just five years after Lincoln was shot--being "cured" by Christian Science.

So, outside of that, how was the play, Mrs. Lincoln?

All religion in my family was intense and matriarchal. My grandfathers were both Catholic but I set no foot in a Catholic church until great grandfathers and others died. My father was a sketchy Lutheran because his mother was, and I have never once been in a Lutheran church. All that was irrelevant. I was a child in that family so I was a Christian Scientist because my mother, her mother, and her mother were. I had no use for doctors nor of medicine. Prayer would heal me. I was a perfect child of God. I was made in God's image and likeness.

My father let my mother take me to Christian Science church every Sunday. I liked the other kids. I strongly disliked most of the Sunday School teachers. Indeed, they were the ones who made me understand the hypocrisy.

But my father would not countenance the cultlike idiocy that many Christian Scientists practice, eschewing medicine. He made us get our shots and doctors' appointments. He kept it sane. When the notions of Christian Science are followed in any fundamentalist sense, people die needlessly. I would not generally call them a death cult but their reason-free faith produces pain and death that I saw up close and felt personally. They are marginalized by a culture that has enough faith in actual science and enough faith in the separation of church and state to allow this bizarre behavior in all but the most extreme cases, and the law even stays out of those, mostly.

How I wish my father could help out ISIS idiots today. They are like Christian Scientists on some cocktail of meth, crack, big guns, charisma, steroids, and head-banging diminished capacity. They say they want to take the world back to the seventh century and as for the end of the world, bring it on. They are emotional children without capacity for grown-up empathy nor diversity of thought. They literally have a capital punishment in mind and intent for much of the world.


And we do see that, with the stated intent, goals, and territory controlled by ISIS, they do want and intend to kill millions, perhaps billions, of humans. They currently control areas comprising some eight million people. They have taken areas in Iraq, Syria, Libya, and are eyeballing Sicily. Italy wet its pants recently, and for good reason.

So? How can humankind stop this ghastly infestation?

We know violence doesn't work. Indeed, arguably, our violence, however justified by our doctrines, has produced the widespread ISIS terrorheart compassionless rage and urge to return to the glory years of a few centuries ago. So let's imagine that we abjure violence, that we see the necessity of inventing or synthesizing existing methods of engagement that use any and all methods except violence. Rather than the complex war machine with destruction as its practice and threat, what are elements of alternatives?


There are many more professional, developmental, academic, and civil society initiatives that could slow, blunt, stop and reverse the violence in the region. We might still see some sort of caliphate, but it could be contained using nonviolent methods much more surely than the failed and failing attacks back and forth that we see now. Let's stop being a death cult and see if others might notice and follow our lead. Let's reduce ISIS to the joke it should be.