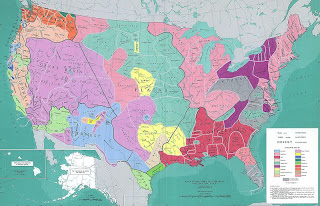 Yes, October 12th is tomorrow and that is the day that Indigenous Turtle Islanders mourn as There-Goes-the-Neighborhood Day, when, 1942, Chris Columbus pulled over, jumped out, and began the greatest theft in human history, of an entire hemisphere.

In 1492
Columbus sailed outside.
He finally came ashore
and started genocide.

Some archeologists believe there were about 30-40 million indigenous members of more than 500 nations in North America and many more to the south. In what would become the continental US, genocidal practices reduced that number to approximately 30,000--nearly completely genocided. The remains of a diversity of fascinating human evolutionary experiments were barely allowed to continue--pushed or tossed or driven onto the worst land under oppressive laws and deep prejudice, and many assumed it was just a matter of time until they died out and the continent would not be bothered with the original people any more.

The original people are still only 1.3 percent of the US population, but that is better than it was. Approximately 2.5 million are FBI--full blood Indian, and 1.6 million more are enrolled in tribes but not full blood. No one knows for sure how many folks across this land actually have original people as one or more of their ancestors. 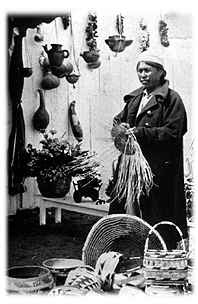 (Yurok basketweaver)
Lucy Thompson, Yurok, wrote a book to her people back in the early 20th century. She dictated it to her anthropologist husband and in it she stated that she was the last to know many of their ways and she anticipated that no Yurok would be left soon. Indeed, there are fewer than 6,000 in the entire US and only a dozen elderly members still speak the language. Still, Lucy never thought they would come back at all. 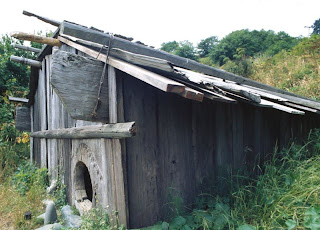 That is just one tiny part of so many stories of theft, murder and genocide and let us please take this day to especially honor the spirit of the Original People and vow to stop public policies that continue to oppress them and deprive them of lifeways they still value and deserve. (Yurok sweatlodge)

Take a moment. Think about it. For the Original People, Columbus Day is a day of deep mourning. These people are hurt, traumatized, and yet rising again. They speak with beautiful, if quiet, voices of hopes for their children and grandchildren. They speak of peace amongst people and peace with Mother Earth.

I wish to be their ally. I invite you to join in that support.
Posted by Tom H. Hastings at 10:39 AM