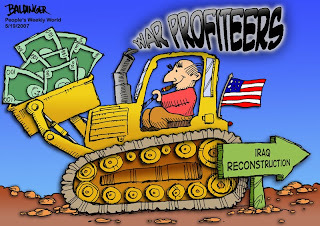 One of the most perduring problems in any effort to turn a war system into a peace system is that we have a destructive conflict industry, that is, people who profit from destructive conflict. From the lawyers who benefit from fighting in court with each other to the war profiteers who hope our foreign policy guarantees enough angry enemies to keep dutiful voting taxpayers in line, we all lose to these relatively few. They are often the majority of Richistan, the ones who are vastly wealthy because of a philosophy that Ronald Reagan clearly enunciated when he told his Director of the Office of Management and Budget, David Stockman, "Defense is not a budget issue." 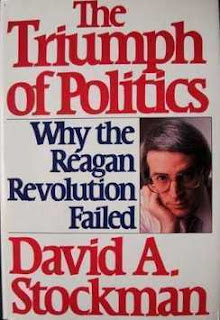 But it is a budget issue, a budget problem of staggering proportions, far more serious and destructive than subprime loans or credit card debt. Military spending has hollowed out our entire economy and left millions unemployed because the money has been spent on capital intensive military programs instead of labor intensive civilian programs, on death-dealing instead of life-enhancing economic sectors.

When the military wins the budget battle, as it does every year, education suffers, infrastructure decays unchecked, the environmental pollution is often unmonitored and even more often unremediated, and all other sectors of our lives are impoverished. This will go on until the economy completely collapses and we have some type of revolution or we will finally start intelligently on a different path.

In a nation with a functional unemployment rate approaching 20 percent (add the "discouraged workers" to the underemployed to the Department of Labor actual filing unemployed numbers), one might hope we are approaching that decision point. The Washington Post reports, for example, that Americans are fed up with the 1.9 million federal workers who make more than their private counterparts and have the best benefits, while many who are struggling in the private sector have no benefits. The standard politician's response in this Reaganista-tainted era is to cut federal workers and subsidize private owners of poorly managed corporations who show massive losses due to bad executive decisions. Don't you love the free enterprise model that tells us from the cradle that in capitalism the smartest companies who offer the best service are the ones who survive and thrive? Not under lemon socialism, the practice of bailing out bad corporations. They are too big to fail and 19 million unemployed Americans are too small to notice.

Imagine, instead, that federal workers made very low wages, but got high benefits. Imagine that every unemployed American could work if she or he simply signed up and showed up for one of these federal jobs. Pay would be minimum, but it would mean that we would finally have universal health care and perhaps even some educational benefits that would enable our workforce to earn while they learned. It's an old idea, pioneered in India by Gandhi, 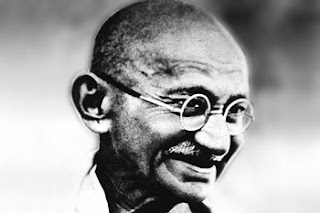 who said that academic learning should only be half the educational time and trade labor in the garden or carpentry or other manual labor should be the other half of the children's time. That model, extended to all Americans, could enable the poorly paid but safety-netted federal worker access to community college or university courses and, over a period of years could help them earn degrees. We used to believe in this country that educating our workforce was in our national interest, and we might get there once again. 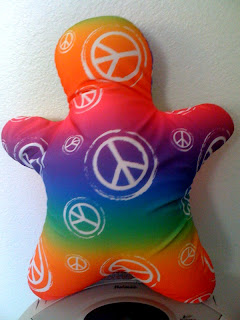 How could we pay for all this? Major slashes, deep cuts to the military budget. Close all foreign bases. End all nuclear programs except clean up. Stop trying to rule the world. Transition from a hyper offensive imperial military to defense to the ultimate peace system of nonviolent defense. We would save hundreds of $ billions annually, better spent on keeping Americans working and learning that fighting, killing and dying. The world might actually like us again, which would be a welcome benefit. And we would demonstrate care about our young people finally, something they rightfully wonder about.
Posted by Tom H. Hastings at 6:43 AM