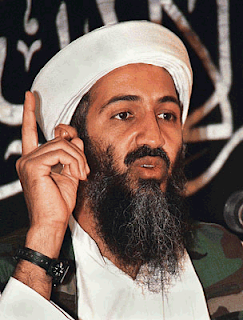 “Contemporary terrorism, however, does pose a particular challenge to diplomacy, in the sense that terrorists loathe the diplomatic rules of engagement, such as communication and negotiation” (Jönson & Aggestam, 2009, p. 48).

While it's a great idea to try to essentialize your enemy if you are a part of the war system, I'd throw down a challenge to those in the field of conflict resolution to try to understand terrorists and learn to communicate with them. Looking at the history of many terrorists and their groups, one might well understand them in the context of understanding a weak passive aggressive boy who is powerless under the normal playground rules but who is plotting to get back at the bully who threw him into the fence and took his lunch money so casually. Bullies often act with such imperious entitlement that they don't see that the boy was trying to communicate when he asked "Please don't rip my shirt!" just before the bully ripped the boy's shirt.

Osama bin Laden is a case in point. He sees himself as the champion of the Muslims who have suffered the multiple tears in their social fabric and in the ancient tapestry of their common culture. He stood up to the Soviet bullies in Afghanistan in the 1980s and was befriended by the Americans. 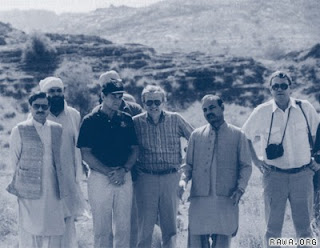 [photo: 1980s Pakistan ISI, US CIA, mujahedeen in Afghanistan] He helped to drive the Soviets out of Afghanistan with a decade of guerrilla warfare along with many mujahedeen. On the heels of that came Saddam's invasion of Kuwait and bin Laden returned to his Saudi Arabia government to offer the services (using communications) of his al Qa'ida fighters, highly organized and ready for action to defend against secularists like Saddam. The Saudi royals told him no, the Americans will do the job. Suddenly, infidels in the most sacred Islamic nations and bin Laden's messages (also known as communications) to the Arab world, to the Muslim world, and even to western journalists like Robert Fisk and Peter Bergen--and thus to all of us in the West--was that he didn't like four things:
~Military aid to the corrupt governments of the Middle East
~UN sanctions on Iraq, even though Saddam was still his enemy, since the bulk of those suffering were children and other innocents
~Military aid to the Israeli Defense Force who enforced the occupation of Palestine in contravention of UN resolutions
~Infidel troops in holy lands

All this communication went unheeded and he jacked up the message to militarism, which in his case was quite weak and thus terrorism. He also claimed that all citizens in the US were participants in the war on Islam, since they elected the people who did these things and then paid their taxes to fund it. Wow. Still communicating. It was an echo of James Baker III, 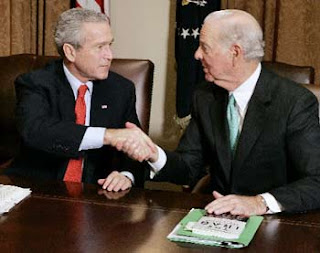 who, when asked about the civilian casualties in Iraq, explained that it was up to the people of Iraq to replace Saddam, so we needed to consider them culpable too. Gosh, since we live in a democracy, that makes bin Laden's argument for violating rules of war even more cogent than Baker's. As a pacifist, I reject them both, but let's at least be fair.

So, before we say they the terrorists don't want to communicate, let's look at whether they've tried and are just 'round the bend from our failure to listen and negotiate.