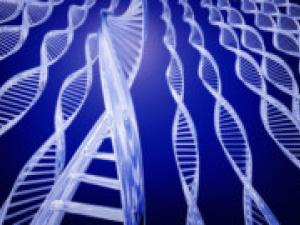 Do you enjoy learning? Do you like making friends? Are you the kind of person who enjoys learning about different people and seeing if they might be new friends of yours?

If you are, don't feel like you are to blame. Turns out that you are not only genetically programmed toward checking out different cultures, but you are likely a flaming liberal too.

The logical follow-up is to track the genetic predisposition toward getting a smaller, vulnerable creature surrounded, down on the ground, and then bravely stomp on her head--and later tell an interviewer that it would never have happened if the police had been doing their job (wasn't that Eichmann's defense?). I think that gene is far more ancient, reptilian, and manifests itself in the most lizardy part of our central nervous system. I like to call it the Rush Limbic gene. 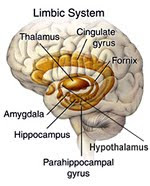 These porcine southern white males who can actually justify this kind of atrocity to themselves apparently have no clue as to how horrific their behavior is to folks. There was a reason the rest of us told them in 1964 that they weren't brave, they have no excuse, that we were in fact now passing the Civil Rights Act that, we hoped, would let them gracefully grow up and stop their bullying. We tried to affirm those victims the next year further with the Voting Rights Act, which again rewarded nonviolence with legal protections.

Was the young woman blameless? No, she was beyond assertive as she moved aggressively toward Rand Paul with her sign; Fox News was fast to point out that aggressive protester behavior. 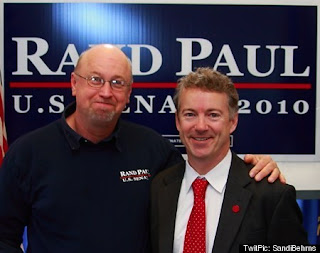 Did that justify a head stomp? Even Fox News affirmed it did not. What is a fact is that if the head stomper had been black he would have been cuffed and stuffed at best, shot dead instantly possibly, by the Kentucky police. But the courageous head stomper was free to go on television later, on his own terms. Mr. Plucky Defender of the Free World would not allow the cameraperson to film his face, so all you saw was his piously folded hands with his wedding ring prominently displayed.

Imagine who gets to benefit from that marriage. One wonders how often his wife and children have been down with their heads on the (hopefully metaphorical) curb? The Louisville Stomper (actually from Paris, Kentucky) is quite an example of the Tea Party manly political movement--he's unemployed with a working wife and somehow found $2,500 to donate to Rand Paul. What a mistake, Mr. Lincoln. You know you should have let them secede. They could have ethnically cleansed all the African Americans and anyone with the compassion gene and we in the North and West would have been so much better off.
Posted by Tom H. Hastings at 5:12 AM