When extremism is reasonable

There is nothing moderate about real nonviolence.

Nonviolence is a lifestyle that would be moderate indeed in a culture that practiced the values of nonviolence amongst its members and toward others. Nonviolence in the US and many other places in the world is quite radical, quite immoderate, and usually some form of challenge to the status quo.

The essence of nonviolence invites extreme positions, since the consequences of disagreeing with someone who is nonviolent will not be a broken nose or gunshot wound--it's seen as just fine to engage in robust argument with such a person. So nonviolent activists fight amongst each other all the time, sometimes failing to practice the excellent communication skills that best protect them when they take their most cantankerous, contrarian selves out into the wider world of non-pacifists. Listening to pacifists argue about vegetarianism or public policy or strategies is not always a model of nonviolent communication as we could best practice it, though sometimes it is.

Dr. King famously noted in his 1963 Letter from a Birmingham Jail that we who proclaim some nonviolent or justice value publicly are often labeled as extremists, and he welcomed that label, noting that "Perhaps the South, the nation and the world are in dire need of creative extremists."

Five years later, just a month after King's assassination, the most radical nonviolent faction of the antiwar movement went into a Selective Service office in Catonsville, Maryland on May 17, and took the files of young men who were all likely headed to Vietnam and burned those files in the parking lot outside. 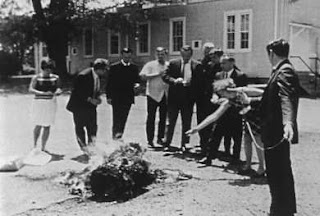 They stayed to publicly witness this and pronounce that war so immoral and so extreme that it was best challenged by acts of extreme nonviolence, extreme love. Their action was so extremely challenging in an extreme time that it created a nonviolent firestorm of copycat actions, at least three dozen of them across the US, jamming the Selective Service system enough to help slow the war machine.

Like the extreme act of Rosa Parks sitting down on a bus in contravention of decades of Jim Crow segregation, like the sit-ins at lunch counters that were extreme statements made publicly by up to 600 young nonviolent resisters at a time in the South, like the extreme act of black people attempting to register to vote in Selma, Alabama and elsewhere in the head-stomping South, these extremists who burned draft records of young men classified 1-A effectively did something both quite real and quite symbolic. Because it was nonviolent, it was not viewed by most Americans as terrorism that needed to be stamped out by any means, which gave it a window of dialog opportunity. That act of burning draft files and remaining on the scene to be accountable for their actions created a powerful and complex message. Dan Berrigan, one of the Catonsville Nine, finally did with one phrase in a court statement to their critics what King had done with his famous letter, reframing the perspective and cracking open conversation that led to widespread movement:

"Our apologies, good friends, for the fracture of good order, the burning of paper instead of children."

Like the best of all nonviolent actions, it both heightened the confrontation and deepened the invitation. Of course this is not reasonable when we are discussing routine civil society public policy matters such as how the city park budget is spent (unless there are really mortal issues at stake, presumably). Staging a big noisy action with a sit-in to try to force a city council to put in more swing-sets is going to be regarded as counter-productive by most rational citizens. But when a draft is sweeping away hundreds of thousands of young men to fight a war of unprovoked invasion and occupation in a land across the world that never threatened us in any way, interfering with that machinery of death can be a way to call the question, to bring the public into the conversation where there had been so little conversation previously. The so-called Catonsville Nine did just that.

“Seven men and two women, all but forgotten by a new generation, had raised the ante and posed thorny questions that are far from resolved. When is military intervention, governmental deceit, a nuclear first strike, or the overwhelming power of the state over individual rights justified, if at all?” (Polner & O’Grady, 1997, p. 216). A wonderful interview of one of the Catonsville Nine, the late Tom Lewis, and a scholar of nonviolence, Michael True, includes some of the original film footage of the action.

The acts of nonviolence that do the most to help us create and develop much needed national discourse are almost always greeted initially by dismissive claims of extremism. One of the strategic questions posed to all who try to work for peace and justice is, "How can my actions spur the kind of public awareness that creates critical truth-seeking conversation where little has existed?" 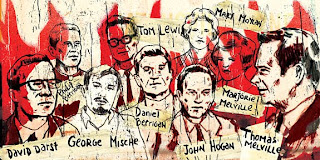 References
Polner, Murray, and Jim O’Grady (1997). Disarmed and dangerous: The radical lives and times of Daniel and Philip Berrigan. New York: HarperCollins.
Posted by Tom H. Hastings at 4:46 AM