Ending extreme poverty (starving, sick, homeless without a social safety net) on Earth, said Jeffrey Sachs, could be done for about $175 billion per year for 20 years, after which humankind could work on garden variety poverty.

The 34 nations of the The Organisation for Economic Co-operation and Development (OECD) could handle this by devoting a small percentage of their gross domestic products to this world-changing project. Of course that 34 includes some sketchy ones, such as Italy.
or
The US could handle it by eliminating nuclear weapons and overseas military bases and bring US military members home to defend the US (for those who like a violent defense). Nuclear weapons themselves are not so expensive--a "mere" $11 billion per year--but their delivery systems are ginormously costly to research, develop, procure, and operate and plans to spend much more, not less, on more and more nukes. Each Trident submarine costs about $3 billion, plus $77 million to maintain each year. Each B61 bomb costs more than 1.5 times its weight in gold. Virginia-class cruise missile-carrying submarines (30 planned) are more than $2.7 billion each, plus operational $50 million annually each. Overseas military bases and operations run more than $90 billion annually (not including warfighting supplements, which were many hundreds of $billions each year from 2002 until the Iraq drawdown).
or
The US could simply whack the $175 billion from the total military budget in some way that matched what the American people felt was appropriate. Look at it and see what you think: 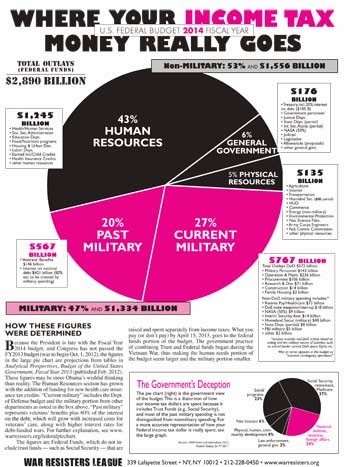 Really, are we better off trying to be boss of the world or maybe earning the love and gratitude of humankind? We cannot do both. The legacy of the US military right now is generations of radicalized Muslims hoping for revenge, general antipathy from the Americas south of Texas, the greatest contributor to global climate chaos, the largest number of Superfund sites, and a flood of US weaponry fueling conflict everywhere. What if we turned off all those spigots and ended extreme poverty instead on planet Earth? Think it would make a difference? Think folks might notice? Think we'd feel better? Think your God would be happy?