Insta-revolution? Apparently, to the privileged nonparticipant

We all get more information every day than we can consume, digest, sort, understand and use. When I was a lad, it had barely begun and most information was still relatively slow or even stationary and needed to be traveled to. Now it comes streaming at us as though we are all college freshpeople tied to the Facts Tracks and the Knowledge Train is bearing down upon us. The problem is separating the dross from the gold, the true from the false, the observed from the opinion, and the proven from the anecdotal. Good luck to us.

For example, we all now know that if you want to overthrow any old political system, just tweet a call to the masses, who then rise up and do the deed. Easy breezy.

Really, not so much, right?

Not only do conditions have to be ripe for an uprising, networks need to exist, and those networks need some shared values, shared grievances, and shared propensity to undertake their struggle using adaptive methods, i.e., nonviolence. Preparing the network with the capacity to pull this off takes a great deal of work and it almost all happens below radar.

This is how it was with African Americans in the American South in the 1950s and 1960s. Ironically, it was war that most prepped that demographic for some sort of rebellion. African Americans died in World War II just as whites and everyone else did. When African American troops came home from fighting for freedom overseas and had none in the American South, they were righteously angry, an anger which generalized into the African American population nationwide. An ongoing injustice is bad enough, but when oppressed people get drafted or even enlisted and found no reward for their sacrifices they expect more respect (mortalities were not compiled by race until the Korea War so numbers are not known, according to the Congressional Research Service (Leland & Oboroceanu, 2010)).

So when James Lawson showed up in Nashville in 1958 after his three years studying Gandhian nonviolence in India for this express purpose, the network of African American anger and intent to bring about change was already formed. It just needed to be activated and steered toward an effective method.

Lawson formed a study group. "Although no one outside their small group was paying much attention, the students were preparing for a frontal attack on what was called Jim Crow, the system of racial hierarchy in the American South" (Ackerman & DuVall, 2000, p. 307). 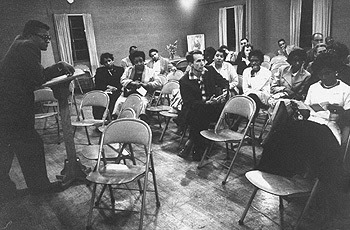 Lawson and one of his groups in 1960.
As is almost always the case, those who weren't oppressed had no clue about the sense of injustice that would lead to an uprising. And even if they started to catch a clue, they would never know where to look. The college kids were the ones.

Movements wax and wane, but some keep them alive in the lull between wars or between major struggles to disarm. Liz McAlister spoke to us in 1995 at St. Scholastica in Duluth, Minnesota, when little was happening toward peace or disarmament. "You are keeping this candle lit in dark times," she told us just before we were about to go out and get arrested the next day at a local military base. Liz knew. She had been in the epicenter of the movement to stop the Vietnam War for years, not only getting arrested herself, but giving up her status as nun and marrying arguably the strongest nonviolent resister to the war in Vietnam, Phil Berrigan, who in turn gave up his status as a priest. They founded a resistance community, Jonah House, which permanentized nonviolent resistance preparation and execution to militarism. Phil served 11 years in prisons for his militant nonviolence.

The hard work of movement building and movement maintenance is what ultimately makes the 'sudden' victories possible. Yes, the addition of social media into the mix of messaging has been a great tool--even one that was suddenly supported by the US government during Arab Spring, which of course massively fueled the false accusations that the Tunisian and Egyptian revolutions were US-engineered (the US could not mobilize people, it could only offer support to something already in motion on the ground by indigenous populations). But it will prove its worth over time by adding to the preparation for mobilizing as much as it proves its worth as the communication tool to swiftly mobilize.