In 1837, 1842, and 1854 the Anishinabe (Ojibwe, or Chippewa) chiefs signed a series of peace treaties with the encroaching hegemonic US government. Those treaty rights all gave up a great deal of land to the US, reserved some land for the tribes, and reserved usufructuary rights for tribal members. Of course these rights were immediately abrogated. Seven generations later, two college kids from the Lac Court Oreilles reservation in Wisconsin conducted a civil resistance action, fishing off-reservation but in the ceded territory protected by those treaties. They were cited and they took that case to court, winning eventually in 1983, in a case that legally reaffirmed those treaty rights. Tribal members were still not able to practice those rights because the state was obstructing them and the white citizens obstructed them. So the tribes began a campaign to openly practice those fishing rights and were met with virulent racism. 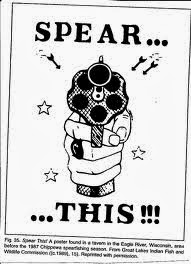 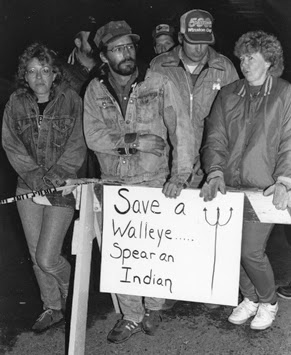 It took three years of disciplined nonviolent action by tribal members to finally win the hearts and minds of the people of the state and the elected officials. So the law might have been on the books, but it took a great deal of direct action and nonviolent persistent public action to finally conjoin the law with reality. Nonviolence fixed it.

In 1960 the college kids in Nashville, Tennessee conducted a sit-in campaign to bring local and state laws into compliance with federal laws. They won. Nonviolence fixed it.

In 1961 the college kids from across the south joined the Freedom Rides with others who "proposed to send an integrated team of activists rolling across the South on commercial bus lines, to have them test compliance with a recent Supreme Court ruling that required the desegregation of interstate buses and terminals" (Ackerman & DuVall, 2000, p. 329). It was a rough campaign, with many beatings and arrests. They won. Nonviolence fixed it.

One of the components of each of these struggles was the discipline of the nonviolent activists, coupled with the open oppression by the racists. These public actions showed the contrast between the demonstrating victims and the hate and violence of the oppressors. It created backfire, which helped lead to victory. There were efforts on the part of the brutal oppressors to squelch the backfire through the methods found in Brian Martin's research:
1. Cover up the action or situation.
2. Devalue the target.
3. Reinterpret what happened.
4. Use official channels that give the appearance of justice.
5. Intimidate or bribe people involved. (2007, p. 206)

In all these cases, the campaigns for justice were able to counter the five methods attempted by the oppressors. This was done by a combination of nonviolent discipline and competent messaging.

Perception thus becomes reality, and reality catches up to the law, but only via education, training, courage and persistence. Nonviolence makes the law worth more than the paper on which it's written.