Bringing CR training to the people and police 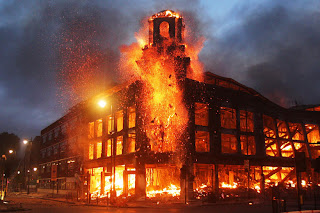 I look at the current understanding of how the rioting began in Britain and I think, well, what if these cops had nonviolence training, conflict resolution training, and authentic community policing connections? Had this been the case, I doubt Britain would be convulsing in riots from city to city as I write. 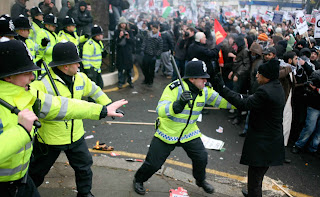 It started in the black community in Tottenham, London. A young black man, Mark Duggan, was shot to death by police, his family and supporters went to the station for some explanation, the police stonewalled them and even shoved one young woman who was a family member of Duggan's, then shoved others, and all hell broke loose and spread.

The police escalated a situation that could have been de-escalated. The made a bad episode worse. Were they legally at fault? No, not in the instance of how they treated the family--an investigation of the shooting of the young man will likely reveal their culpability in that instance, however, at least if current police reports are borne out. But they performed lousy police practice in any case in handling family and community peaceful protests. The era of Mugabe-like tactics is, or should be, so very over. Police don't have a license to kill and they should learn to respect a community's grief or risk that community losing control of its pent-up rage.

Youth should all be getting conflict resolution education and practice as well. The school system should train youth in nonviolent conflict de-escalation. Further, citizenship classes in all public education should be teaching nonviolent civil society strategies and the reasons for them. After all, if the general community of youth is aware that they are only going to be hurt and lose much more than they gain by rioting rather than using the alternative tactics they are taught in civics class, they will be less inclined to riot.

I don't know who is teaching them this in Chile, but check out how the high school youth put a check on some in their protest who wanted to up the ante (thanks, Francisca, for this). This protest, obviously not in a well off neighborhood, was an attempt to demand free public education and the students refused to be hijacked by others wearing masks and doing things that would alienate regular Chileans from their cause. Too bad the black British youth didn't have this sort of knowledge and spontaneous leadership. Of course, Chileans of all ages know it was disciplined nonviolence that finally deposed the dictator Pinochet, so they have some cultural collective sense of a cost-benefit analysis of the methods they use.

Prophylactic nonviolence and conflict resolution education and training is a wise investment. At some adaptive point, our societies may understand and implement this.
Posted by Tom H. Hastings at 11:40 PM