When we were moving from protest to resistance in our campaign to shut down a nuclear command facility (Project Extremely Low Frequency, or ELF) along the north coasts of Wisconsin and Michigan we had a welter of opinions about methods. Most of us wanted to use nonviolence, but some said they were so angry they really couldn't promise anything. After all, we had voted against the US navy project again and again, including a vote in Michigan's Upper Peninsula that counted some 80 percent against the navy project in referenda in all counties of the UP. Yoopers were enraged and back in Wisconsin, where the navy had run into a wall of opposition since it built a 'test' facility in 1969, virtually all elected officials were opposed to it, so when they expanded the system into Michigan and clearly violated their promise to dismantle the Wisconsin 'test' facility once testing was complete ("Hey boys! It's been a lot of years now!") northern Wisconsin loggers, farmers, and small resort owners were also good and angry. 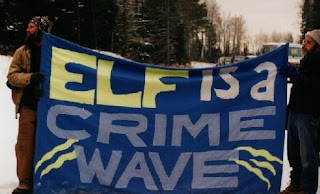 I got many notices, phone calls, and comments such as, "Sorry, not going to join your demonstration. I'm going out one of these days and shoot out the antenna." Like so many other huffs and puffs about the violent things one is "going to do one of these days," no one ever did. Meanwhile, our resistance was ongoing for years. The navy was constantly hoping we might get violent, I think, and when we started cutting down poles that supported the antenna line, they called us 'terrorists.'

Too late. No one believed them. Not our neighbors, not law enforcement, not juries. We were so open, so nonviolent, and so accountable for our actions that we won lots of respect and some hearts and minds. We were never derailed by violence. We had one group come up from a city who evidently thought they were going to show us the real radical way to do things. After we spent a whole year pulling the surveyor stakes out of the forest and confronting the navy at every turn, including sending media release copies to the sheriff telling him where we'd be doing our nonviolent civil resistance, the 'radicals' from Madison finally joined us for one outing and when they did their group photo they all wore bandanas covering their faces. We all snorted. That was the radical way? We thought standing up and showing our faces and speaking as ourselves by name was far more radical and honest. At least the Madison group didn't threaten violence. If they would have, we would have renounced them.

We knew then, and research has borne out, that threats of violence and violence do not make a movement more effective. As a rule, violence decreases chances of success in social movements. Chenoweth and Stephan (2011) measured that factor in several ways in their sample of 323 major social struggles between 1900 and 2006. Their methodology is explained in detail in their new book, but is also clear in their 2008 International Security journal article. 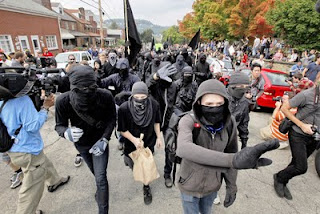 “A ‘negative radical flank effect,’ or spoiler effect, occurs when another party’s violence decreases the leverage of a challenge group” (p. 43).
Violence is a loser or ends in stalemate some 74 percent of the time, while nonviolence succeeds more than 53 percent of the time. The radical flank drags down a campaign and the realists who are not pacifists need to rethink nonviolence as a strategy, if not a philosophy.
References
Chenoweth, Erica, & Stephan, Maria J. (2011). Why civil resistance works: The strategic logic of nonviolent conflict. New York, NY: Columbia University Press.
Posted by Tom H. Hastings at 7:37 PM