We often use the word peace to mean many different things ("Our men and women in uniform are fighting for peace"). Same with violence ("She is violently opposed to that hairstyle"). Certainly force is ambiguous (Q: "Do you advocate the overthrow of the government by force or violence?" A: "Force").

In the field of Peace and Conflict Studies there are several ways we use the word transform. Some hold that transformative mediation is all about achieving kumbaya with parties who had, to that point, been plotting each other's excruciating demise. Others refer to changing the conflict from adversarial to mutual problem-solving in a collaborative learning process. Some simply mean a minimalist goal: that you do what it takes to move a conflict from violence to nonviolence. I used to be a dewy-eyed idealist who longed for the most expansive use of transformation. Now I'm a flinty-eyed realist who sees the futility in most cases of any method beyond simply eliminating the violence. Others can rise to lofty heights of Gandhian glory or true Christianity (remember the Jesus famous one-two punch of nonviolence and loving the enemy?). I'll see about a barebones approach, simply waging conflict without committing violence.

So, you have a conflict. You need to transform it. What are the principles and what are the steps? Let's consider the worst case, living under occupation or under some form of brutal tyranny, which even includes preparation to assist security force defections--though plenty of domestic conflicts in 'free' nations require plenty of liaison with security forces in order to speed success.


The essential steps in a successful campaign might include:


All these elements and more affect your chances for success--including the individual personality types of leaders on all sides, a factor important to consider as you seek to create the customized solution to your unique conflict. Chenoweth and Stephan (2011) note several of these variables and more, and then add, “Strategic factors like achieving unity around shared goals and methods, establishing realistic goals, assessing opponent vulnerabilities and sources of leverage, sequencing tactics, and navigating structural constraints (including regime repression) are also likely to be crucial determinants of campaign outcomes” (pp. 40-41).
So, you want to stop police from shooting unarmed citizens or you want to shut down a military recruiting station. You want to overthrow a despot or you want to preserve school lunches for poor kids. Every one of theses campaigns shares all these principles and strategies and tactics and more, just adjusted for your struggle. One overall goal is the same in any campaign to protect, preserve or change: winning hearts and minds. Everything should be assessed through that lens. Chenowth and Stephan ran the data and the results are clear that the greater the proportion of the population you enlist as participants, the stronger your chances are for success. 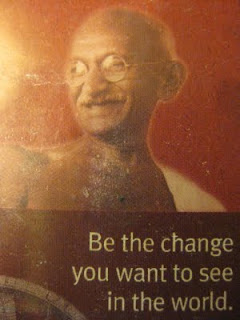 While Margaret Mead was correct (Never doubt that a small group of thoughtful, committed people can change the world. Indeed, it's the only thing that ever has."), that small group's first thought should be how to recruit. These are the combinations of actions and thought that can relieve Jonathan Schell's declaration some years ago back in the Olde Millennium when I heard him speak at a Consortium on Peace Research, Education and Development conference at Sienna College in Albany, "I am tired of going down in noble defeat." Nonviolence is the most winning strategy and will beat the pants off violence if organizers pay attention to the hard work and strategic thought necessary.
References
Chenoweth, Erica, & Stephan, Maria J. (2011). Why civil resistance works: The strategic logic of nonviolent conflict. New York, NY: Columbia University Press.
Posted by Tom H. Hastings at 8:52 AM