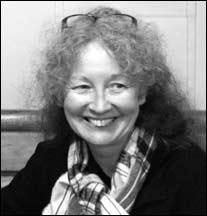 Last evening I enjoyed a talk by Kathy Kelly, founder of Voices for Creative Nonviolence, a 58-year-old veteran of a great number of nonviolent campaigns and probably the best peace journalist in play. I know of no other journalist who makes so many trips straight into the hottest conflict zones on Earth to ply for peace.

It is unknown to me how many such trips she has made, but when she writes, I am one of those who tries to send it out for as much distribution as I can. She doesn't go alone and she's always training in new peace journalists on her teams--and now she has teams in the field without her sometimes.

What is her expertise?

She is self-made. She lives in a community and lives very frugally. She is a former high school teacher who just threw herself into the gears of empire as one little woman and she has earned the love and respect of thousands from East to West, from Christians and Muslims and peaceniks and warriors. Mostly, the mothers and children love her and trust her. She is an exemplar of someone who knows intuitively what so many of us struggle to learn how to do, that is to separate the people from the problem. When she was in Baghdad for Shock and Awe, she came out and offered US soldiers water in the terrible heat, even though she did everything in her power to oppose their mission. She works with many former soldiers, one of whom says he is back in Afghanistan now "to complete the mission." He apologized for coming the first time as a US soldier.

We are admonished rhetorically when we are young that we should try to live lives that mean something to the world. Kathy Kelly is one who has taken that seriously. I recommend sending in your discretionary income to her efforts, to:

They partner with indigenous civil society groups on the ground, including Afghan Youth and others who work from within their cultures for peace. Kathy has carved and crafted a life of the most Gandhian, selfless worth. She has taken the best from her sheros, including Dorothy Day, and is helping to make that life possible for those with the heart to join her. 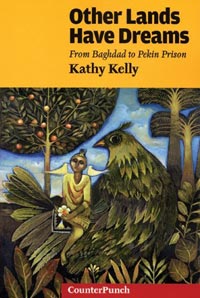