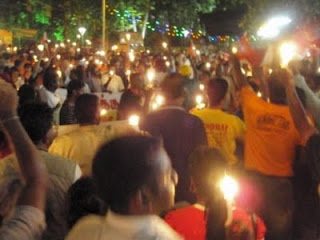 Getting into the pluralistic field in the US or other pluralistic societies to practice nonviolence means working not only for the rights of marginalized peoples, but accepting their leadership. And if you are working on a campaign in the broader public interest and not specifically for the rights of one religious, ethnic or other group with a grievance, you need the participation of the many groups who are in some way marginalized. The idea, then, is to create as broad a coalition as possible by choosing boundaries that include rather than exclude.

So, by that logic, and leaving morals and ethics aside, we should be open to violence or nonviolence, until we look a little deeper. Because violence will produce a stronger and swifter and harsher response from the state--look at the new proposals in Britain to evict all rioters and their families from public housing, a proposal that will be debated in Parliament and is supported from the top down--we can expect those in marginal groups who know that they are profiled and targeted much faster to eschew the much higher risk of violence (even eventually the youth, who take to risk much more than do those even in their mid-late 20s and older).

Consider the calculus of all your possible diverse participants and construct the largest overlap area that will exclude the fewest and convince the most to engage. You will almost certainly decide not only on nonviolence but on a set of behaviors that evoke sympathy, not anger. Dignified--or at least widely sympathetic--protest in a pluralistic society in particular is what holds the widest appeal. Does this constrain creativity? 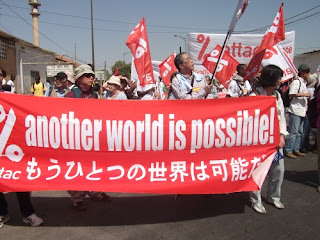 Not to Michael Moore. I still show students his old TV shows (TV Nation, The Awful Truth) episodes in which he designs nonviolent actions that are creative and generally sympathetic, attractive to more members our diverse society. Chenoweth and Stephan (2011), write, “Diverse participation increases the likelihood of tactical diversity, since different groups and associations are familiar with different forms of resistance and bring unique skills and capacities to the fight, which makes outmaneuvering the opponent and increasing pressure points more plausible” (p. 40).
This is where threading the needle is tricky. A diversity of tactics that works is not a diversity of tactics that brings the wrath of the state down upon your people, but rather manages to challenge the legitimacy of the state--or at least certain parts of the state--in the eyes of the public. A diversity of tactics, then, is about creative use of humor, technology, cultural activities and other nonviolent oppositional tactics that can best be designed and delivered by a truly diverse movement. It is not a diversity of tactics that uses a mix of violence and nonviolence, since that will tend to offer up those who are normally profiled as targets first. Joining a movement for peace, environmental protection, labor rights or other universal campaigns should feel relatively safe to the most vulnerable, not feel as though they now assume more risk than others because the movement has decided to embrace more risky tactics. In short, all tactics should be designed to maximize diversity without sacrificing the diversity of people.
References
Chenoweth, Erica, & Stephan, Maria J. (2011). Why civil resistance works: The strategic logic of nonviolent conflict. New York, NY: Columbia University Press.
Posted by Tom H. Hastings at 8:30 AM