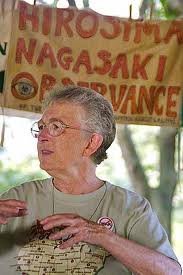 Sister Jackie Hudson, OP, has passed on in the morning of 3 August 2011. The little old nun was basically nearly tortured to death in a Tennessee jail for her nonviolent resistance to nuclear weapons, and she lived long enough to come home to her beloved Pacific Northwest to die amongst all who loved her. Jackie made a late life career out of nonviolent resistance to these godawful weapons, always with a wry smile and sense of humor.

It was finally the multiple myeloma, a brutal cancer that runs in the bloodstream, that took her life, and the jail staff at the Irwin County detention facility in Tennessee made her suffer tremendously in great pain for two weeks. Many of us called to inquire after her. When I finally reached an actual person and was lied to directly and repeatedly ("She's fine.") I simply said, "Well, she's a precious person to many and has only helped and never hurt so you take good care of her." We were all getting daily reports from Joe Power-Drutis, a nurse, who was Jackie's good friend and knew how she suffered. It was shameful, like a domestic Abu Ghraib. 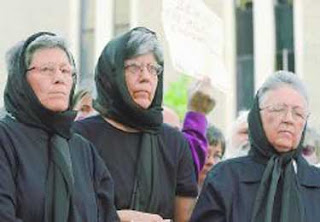 But Jackie life was much more than her dying process. I did not know her as well as some of the Midwestern nuns nor the East Coast Atlantic Life Community nuns, all of whom are amazing to me, but she was the West Coast anchor in that greater community of nuclear reSisters. She took her gray hair out to the bombs and hammered on them, joining our Plowshares tradition with a faith that carries a legacy of loving defiance.

Jackie was judged by the US legal system but that is irrelevant. Mother Nature, the Creator, and all who hold nonviolent love as our human highest aspiration have judged Jackie a Shero of our times. Take three minutes to meet her if you haven't. She and some other Wondernuns are the sheroes of the documentary Conviction, and this is a short clip with Jackie. Jackie, go with Goddess.
Posted by Tom H. Hastings at 6:06 AM

This brought tears to my eyes. Thank you for sharing!

Thank you. We have a novena lit for Jackie here at Whitefeather Peace House. I'll add your good spirit to our collective.