The romance of revolution conjures an image of a population in revolt, guns in the hands of every adult, children doing whatever adults will let them do (running messages, bringing food to fighters, keeping a lookout), and the forces of the state dealing with an armed and hostile population.

It is like a recruitment poster, but for revolution instead of the army of the empire. Unfortunately, it rarely even approximates the truth. If it did, the revolution would succeed fairly quickly. Reality is far closer to what we normally see, a struggle that takes years, sometimes decades, and often ends in a near stalemate with a fairly authoritarian new "revolutionary" regime. Each case is different, unique, but there are some constants.
Chenoweth and Stephan (2011) note that, “Once mobilization begins, a nonviolent resistance campaign has wider appeal than a violent one, thereby enlarging the personnel base of the former and bring more assets and resources to the fight against a state opponent” (p. 32) 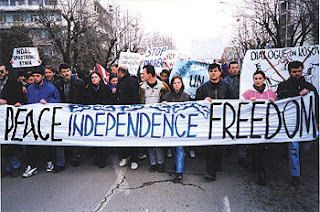 We think of revolutionary movements and that is more clear as we take off the "I-love-Che" Rosie Red Revolutionary glasses and look soberly at the evidence. When the uprising is violent, what Chenoweth and Stephan call "barriers to recruitment" are much higher. It's all or nothing with violence, in terms of commitment. You are in the armed forces or out, pretty much. The wild notion of the worker also engaging in violent revolution is absurd and is so rare that it's not a real factor. But it's quite possible to engage regular folks in many nonviolent actions that involve the two elements that make for strong recruitment: low risk, high benefit. Boycotting is low risk. Get enough people joining and the benefits are high in that costs to the oppressor are enormous.

I think the key word is soberly. Engaging in social movements, even those as radical as toppling a regime, can be very low cost to the individual. The average adult sizes up the costs and benefits and, when violence is the only possible consideration, usually does not participate. Only once nonviolence is assessed will that citizen test the waters of involvement, for most people. The leaders of the movement who stress the lower risk actions will be rewarded with stronger responses to recruitment.

This does not eliminate the higher risk nonviolent actions, but it means those higher risk actions should be framed as only one aspect, not "the" path for everyone. It is never helpful to hold up the martyr as the example everyone should follow. Very few will. In the world of nonviolence, we are better served by holding up those martyrs as inspiration, not as people whose lives we need to emulate. They challenge us to be involved, but they are not the models set out to copy. "She served 20 years in prison! If you can't do that, you aren't really for peace!" That is a losing strategy. "She served 20 years in prison. Can we count on everyone to participate in the boycott of General Electric until they stop making the weapons that she valiantly resists?" That is a stronger strategy.

So, thank you, martyrs and moral sheroes. You help us recruit many more people into our nonviolent disarmy. We will continue to be more effective than violence.