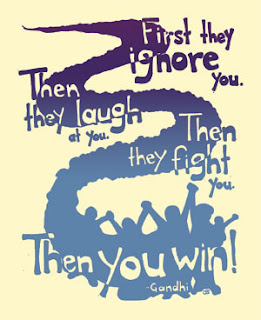 For the most part, strategic nonviolence is through the stages of being ignored and laughed at. In some general senses, the next phase is underway. In Iran, China, Zimbabwe, West Papua, Palestine Israel and other places with nonviolent movements, they are experiencing the crackdown, and have for some time. And in the politically partisan world, the left and the right alike, which have all their conflict eggs in one violent basket, are attacking nonviolence whenever they can. I mean, even the tiny Nonviolent Peaceforce conference in Boston was greeted by a tiny group of leftwing protesters because the featured speaker for the conference was Gene Sharp. 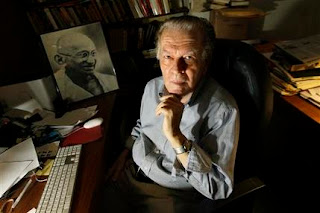 All over the murky, smeary blogosphere we read mis-and-disinformation about Sharp's Albert Einstein Institution and another think tank, the International Center on Nonviolent Conflict, promulgated by doctrinaire lefties.

Sharp himself will turn 83 in a minute (b 28 January 1928) so I know he's down and dirty for a good brawl--seeing the cartoons of him,

George Soros and John McCain plotting to overthrow the Islamic Revolution (created and disseminated, reportedly, by the Iranian government, and who knew the three could all speak fluent Farsi) showed his lust for global power. Sigh. That was good for a bewildered laugh. Gene has always been a combative pacifist, eschewing the moral arguments, even though as I've come to slightly know him and certainly know his works I see that moral proscriptions against killing inform his very fiber (which he would probably still deny). He's a bit fixated on simply showing that this stuff works and so take pains to avoid the namby pamby moral arguments.

ICNC is under constant attack from the Maoists, Stalinists, Marxist-Leninists and others who go apoplectic whenever two things happen. One, anyone supports civil society movements against enemies of the US. Two, anyone suggests that violent blood-in-the-streets revolution for liberation movements trying to overthrow friends of the US is not necessarily the best cost-benefit approach.

This puts the ultraleftists in a chauvanistic pickle. On the one hand, how dare anyone put the amazingly effective tools of strategic nonviolence in the hands of people who wish to use them to overthrow a regime that the US would also like overthrown? On the other hand, how dare anyone assert that stupid ineffective nonviolence could possibly substitute for good old American (scratch that) Bolshevik or Maoist revolutionary vanguard slaughter? While their arguments are beyond oxymoronic and well into the self annihilatory, at least they can shout and chant that ICNC and Gene Sharp are agents of imperialism in any case ("THIS IS WHAT IMPERIALISM LOOKS LIKE!" Repeat ad nauseam, fortissimo). And besides, Che was sexy and Gandhi most emphatically was not, so there there there.

To sum, prepare for the continuing crackdown from the Ahmadinijad-types and his buddies the uberleft, as well as the usual from Israel, Indonesia, and, sadly, Chavez in Venezuela, as well as others who may look like opposites from a cosmological orientation that is US-centric but who share a need to dominate by any means.

But hope for the best. May Aung San Suu Kyi lead her people to true democracy and may the Green Revolution finally succeed. May Palestinian nonviolence affirm Israel only inside the 1967 borders and launch the new nonviolent Palestine. May Robert Mugabe and Laurent Gbagbo sail off to the Isle of Deposed Dictators. And may Gene Sharp finally mellow and admit that his hard kickass rhetorical carapace only shields a mushy pacifist on the inside. We can hope!

Happy 2011. First decade of the new millennium down, mercifully. Now what?
Posted by Tom H. Hastings at 8:38 AM