It is vitally important, of course, to believe everything reported in the various corporate and state media. How else can we get the real news? That darn Internet is sketchy and we can all have a good laugh when we think of crackpots who post and claim all sorts of wild things. Tinfoil hats is how we write them off. It is easy to find Holocaust deniers and not a few who claim that Dick Cheney is from another planet. So who can we trust? (Hint: I'd bet on the other planet crowd)

As with kissing frogs until you finally get that prince, or panning for gold in a cold gravelly stream, it's a matter of looking closely and realizing that there is always more worthwhile to discover, but it may be in association with a lot of junk. You develop a practiced eye, you learn from experience that even the hotshot award-winning journalists can make mistakes, and that some outstanding analysis and important news can be found in unregarded corners.

So, when the last election was held in Tunisia, for instance, on 25 October 2009, Zinedine Ben Ali won a landslide victory, with 89.62% of the vote, keeping his beloved visage on public buildings in 20-foot-high mugshots, just where Tunisians wanted him, right? 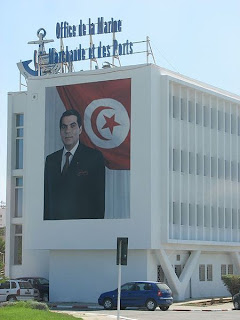 Just a bit more than a year later, the streets filled with those who mysteriously flipped their support to demands that Ben Ali leave, which he did. The Korea Times reported that he managed to take along some 1.5 tons of his country's gold as he left. Could it be that Ben Ali really didn't have all that support when the votes were cast and counted? I think a relatively tiny amount of common sense would suggest exactly that, even though the US continued to send him military support while Human Rights Watch cited the election as deeply flawed. The people verified that and have continued, rejecting Prime Minister Mohammed Ghannouchi's assumption of power. They have stayed in the streets and he has announced that all cabinet members who were Ben Ali loyalists will now be replaced. The Tunisians in the street are saying, great, and you must leave too. Always on top of things and keenly able to predict the future because of their mammoth budget, the CIA is, as of this morning, still showing Ben Ali as the acting President. Whoops, turns out the CIA can't even predict the past. Well, they are still smarting from their failure on that Berlin Wall, Cold War thingie 21 years ago. We can only hope more $hundreds of billions help them with their PTSD.

Meanwhile! Those yumpin' Yemenis have joined the party, with the Egyptians out ahead of them. The Arab street got heat. In Cairo, Nobel Laureate Mohamed ElBaradei has now been water-cannoned and is under house arrest--again, all paid for by US military funding and support that goes back to the Carter administration, when Anwar Sadat and Menachim Begin agreed to accept massive US bribes in exchange for peace. These bribes have continued and we now see the military aid to Israel at about $3 billion annually, enabling Israel to ignore world opinion as it "settled" the West Bank, which is Palestine. It also funded the 30-year reign of Sadat's successor, Hosni Mubarak, by giving him $billions annually to keep his own people quashed. They are unquashing now. And anyone, even Leon Panetta, could have predicted that the growing amount of US military aid to Yemen would backfire into more opposition at some time. The US doubled down in Yemen and it has only seen more al-Qa'ida activity and widespread hostility to the US and its own government.

So, with these undemocratic, US-propped-up regimes becoming rapidly unpropped, what is the US response? Obama has tried to stay close enough to the curve to avoid landing totally on the wrong side--a bit reminiscent of Reagan suddenly switching at the last instant on Marcos and Aquino in the Philippines in 1986 and then later we saw Bush Senior flip flop on South Africa, but there has been no acknowledgment that the US has effectively kept real democracy at bay in the Middle East for decades, even as we have trumpeted that we have brought it to Iraq by force of arms. Iraq actually passed Israel as the Numero Uno US military aid recipient. That's obviously working out as more IEDs and suicide bombers continue to show the desperate results, as hyperarmed US troops vainly try to beat insurgent swords into plowshares. 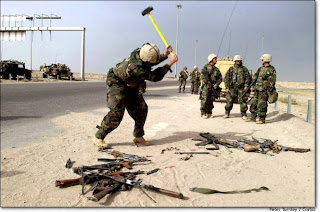 So, you ask, why do we pour that money into rotten regimes? Who benefits? I know this is a shocker, but it's the owners of the war system. The aid that goes to anyone (except our 51st state, Israel) must be spent entirely on US war corporations. This is nothing more than a massive shift of your hard-earned money into the pockets of the war profiteers and it does nothing for the honest spread of democracy. It does everything, instead, for the erosion of the US image and we now see the fumaroles from Arab civil society showing signs of the Final Eruption. Those who have been transferring knowledge about strategic nonviolent struggle to civil society are the ones who are helping the most to enable the uprising to remain nonviolent, but that is so pitifully small in the big picture that all we can hope is that, like the Filipinas, like the Serbs, like the Estonians and others, the masses will somehow manage to make it both raucous and nonviolent. The bad old days of blood in the streets as a revolutionary imperative are no longer necessary in any way. May the Arab masses show the world their cost-effective version of a Velvet Intifada, a transnational wave similar to the Central and Eastern Europe wave of 1989-1991.

Stay tuned, but keep switching sources. Lots out there, but those nuggets need to be spotted by your increasingly sophisticated eye.
Posted by Tom H. Hastings at 6:13 AM

Turns out, the older I get, that it seems we are becoming a mercenary-like state when it comes to our military. Sure democracy can be a good thing, but when some people aren't ready for it, or can't accept it, you cannot install it forcefully. Nor does it work, when (like a pseudo-mercenary state) it is for a certain faction's own benefit. Be it the American people, our government, or our allies, the people of Iraq were the labeled benefactor, but not necessarily the core benefactor. Sure, we've been in the Middle-East for too long, and Bush did some stupid things. But it seems that as much as Obama waves his finger, that's all he does. He's been about as stern with other nations as one-ply toilet paper. It would be nice for a change to just focus on our own country's problems for a change since the only thing he's shown tact with is waging his own war on things such as health care. How bout helping the homeless in the U.S. or doing something about the Mexican Cartels and their involvement in southern U.S.? That'd be a good change.

Yes, the mixed signals from our government are painful to watch. Obama seems to be finally putting one or two slender strings on the massive military aid we give to Mubarak, and yet reportedly there are more than 100 shot dead in the streets already and I hear little that makes me believe we will negatively sanction that crackdown. Don't we have better places to spend your tax dollars?