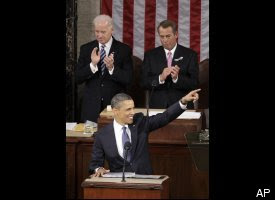 Barack Obama gave the 2011 State of the Union and it was a fine speech, hitting many notes that inspire us to want to be better parents, better workers, better citizens, better students, and better teachers. He swore to protect the most vulnerable and to fight to close tax loopholes for the rich. One of the best moments was his rousing finish, when he told the story of Center Rock, a Pennsylvania drilling company that responded to the Chilean mining disaster by designing a drill rig that rescued the 33 trapped miners. That touched hearts. That was about saving lives using ingenuity and technology, not taking lives with more bombs and more guns.

Sadly, however, President Obama did not address the truly massive, tough budget issue, the military spending that has eviscerated our economy and set the stage for the recession, joblessness and foreclosures. Instead, he called for a five-year freeze on all the life-affirming human service spending and vaguely and briefly boasted that even the Pentagon is helping by cutting back:

The Secretary of Defense has also agreed to cut tens of billions of dollars in spending that he and his generals believe our military can do without.
--President Obama from the 2011 State of the Union address 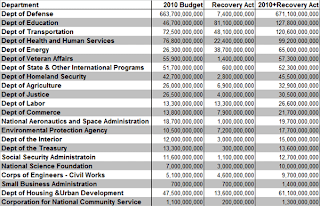 This is grossly misleading. With an annual budget in excess of a $trillion (by the time you add in the many military items, such as nuclear weapons, that don't officially fall into the Pentagon budget), the DoD and Congress are contemplating a cut of some $78 billion spread out over several years. This is a tiny percentage of the bloated budget, and should be an insult to the intelligence of every hardworking American. While health care and education and environmental protection are frozen or slashed deeply and our ability to threaten the entire world is barely dented, it is highly disingenuous to pretend that we are truly changing to an economic model that is sustainable or sensible.

The other sour note in the address for anyone who is interested in positive peace and in helping our young people:

Starting this year, no American will be forbidden from serving the country they love because of who they love. And with that change, I call on all our college campuses to open their doors to our military recruiters and ROTC. 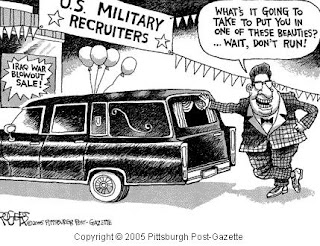 No thank you. I prefer to try to get more of our young people into jobs where they don't carry guns, where they don't grab joy sticks in a trailer in Creech Air Force base to shoot missiles at civilians thousands of miles away. I want them to be safe and I want them to do work that helps instead of hurts. I want to demilitarize rather than further militarize our campuses. Being gay-friendly is supposed to make the military attractive and the war system suddenly great? No thank you.

There are other, stronger, more future-oriented ways to manage conflict than to carry on as though killing and destroying is our human destiny. I heard not one word about teaching peace and conflict resolution skills to our children or to our students. The investments in solar and wind power are necessary and welcome. But where is the investment in different ways to resolve conflict? This would take a tiny percentage of what is currently poured into the war system and would return huge gains and benefits in the form of saved lives and taxpayers' funds.

The state of the US is stuck in the war system and nothing will be truly fixed until we turn in another direction, toward a peace system. It is a shame that isn't happening.
Posted by Tom H. Hastings at 4:57 AM