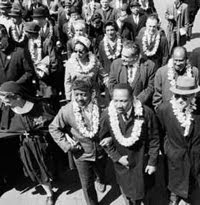 Authenticity, honesty, sincerity and transparency are hallmarks of a movement that tends to both win friends and supporters at the same time it tends to reduce opposition and the desire to punish and destroy the members of that movement. On the other hand, rhetoric about peace or nonviolence accompanied by snarling facial expressions, strident chanting and clenched fists is often simply not believed. Responses are predictable. 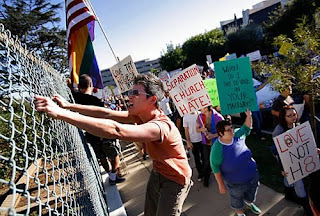 Kinesics, the interpretation of body language cues, can drastically influence the course and outcome of a disagreement, a street protest, and even the received message from leadership. Right or wrong, most humans tend to make those interpretations. Are the penetrating stares you are receiving a sign that the others are interested in listening to you carefully and respectfully, or are they signs of hostility and aggression? All else being equal, many humans tend to interpret any discrepancies in the worst light, guarding against being duped. Convince your opponent that you have bad intentions and you can expect the worst.

There are reasons for many of the guidelines we often use in many movements. Appearing harmless is consonant with nonviolent rhetoric and consistency is how the sense of authenticity is conveyed and eventually believed. Open, visible, empty hands, palms up, show a willingness to expose a nonthreatening, unarmed and well intentioned attitude. This is very different from obsequious groveling, which is logically and normally distrusted. Meeting the impassive stares of the SWAT team with a look of concerned commitment is dignified and does not tend to draw down brutality. 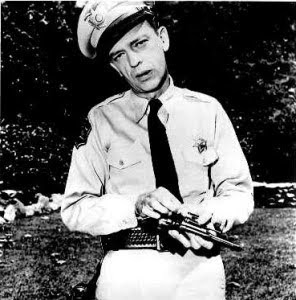 I've been in countless street actions and confrontations at military bases. Yes, I've been harmed, physically, but that is rare and never when once I'm known to guards, police, or whatever physical troops are on hand. Showing up once, getting shoved around, and bringing a poor attitude from that point on is a guarantee of a downward spiral of abuse. As a very young man and not at political actions I responded to police aggression with my own physically defensive reaction. I did this twice and still carry the scars. I guess I am blessed that I learned this the hard way without besmirching the image of any movement.

Why court willful misinterpretation of our sincere actions for peace and justice? Training and roleplaying can reduce these problems to almost nil. Leadership that is calm and genuine sets a tone--bellowing and raging speakers tend to froth up less stable members of any movement and concomitantly sets all the warning lights flashing red amongst police and military. Bullhorns and stridency are how we guarantee we alienate instead of recruit. Is this really our goal?

The idea is to win. Winning happens more often by invitation, not alienation. Smiling faces are going to draw participation more than grimaces of rage, however justified that rage may be. Whether nonverbals are 90 percent or 50 or 10 percent of the message received is a debatable research question--I certainly don't get more than 10 percent from watching a quiet conversation in Urdu (or in English with the sound turned off), nor do I feel as though I only get 10 percent from an emoticon-free email. But larger movements work more effectively than smaller ones--this is really not debatable. Learning to give off the right message without saying a word is part of movement recruitment strategy and training.