Finding common ground in a battlefield 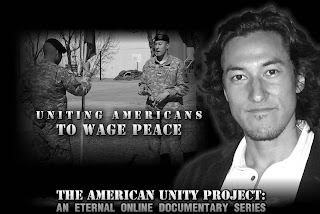 The efforts to build any nonviolent movement are hampered by those who favor violence. However, the numbers of people who favor violence because they are pathologically drawn to it are very small; most favor violence because they have no logic that tells them that nonviolence can actually work. The logic is there, but not taught and not held as a primary value. While nonviolence as a fine philosophy has been around for millennia, nonviolence as a way to wage serious struggle is barely a century old, and, in reality, not much more than half a century, since it took Gandhi--the originator of globally known effective mass nonviolence--until almost mid-20th century to gain his victory. In short, for most humans, nonviolence is a nice idea that they don't equate with effective liberation or national defense. (pictured above: Paul Chappell)

Efforts may be needed to support the determination to continue the struggle. The participants must believe their action is justified, the gained objectives will be worthwhile, and the means of action have been wisely chosen. Their morale is likely to increase if the resisters understand the techniques well and if the goals and means of struggle are, or can be, related to the general population’s accepted values (Sharp, 2005, p. 388). 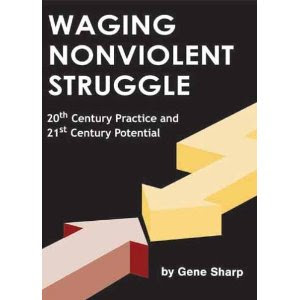 Where is the common ground, then, to identify and reify shared values? How can a pacifist like me hope to convince dedicated violent warriors? Of course, I can cite histories, such as Gandhi, Kenneth Kaunda and Bill Sutherland, the Filipinas, the Civil Rights movement, the Serbs, the Estonians and much more--and I do. I can refer people to the great research done by Erica Chenoweth, Maria Stephan and many others, and I do. But for many who trust the warriors who serve in the armed forces, I like to refer to people like

Bob Helvey and Paul Chappell. (watch the Kentucky video on the Chappell linked site) They are authentic soldiers and genuine students of strategic nonviolence.

Finding common ground in nonviolent struggle with Quakers and Anabaptist peace believers is usually easy, but they are a tiny minority. Similarly for adherents to Jainist nonviolence, certain strands of Buddhism and other philosophical and religious pacifists. But when we can establish a cadre of former warriors who have not necessarily converted to philosophical pacifism but who hold that in fact strategic nonviolence is the most effective way to win with the fewest costs, that common ground with the majority of citizens at least has a beachhead. Then it's up to all of us to take and hold more such common ground with more of our fellow citizens.

Some other authors to consider on nonviolence theory include George Lakey, A Manual on Nonviolent Direct Action Campaigns, Powerful Peacemaking & Strategy for a Living Revolution and William Moyer(not the PBS guy) Doing Democracy.

Great to see a quote from Gene Sharp. Not many activists are aware of his work. His research and writings are vital to the advancement of nonviolent action.