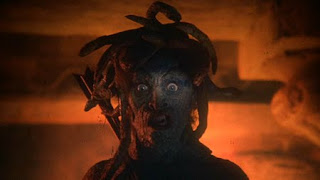 More and more tools are being developed by the violent side, contributing to the emergence of a society more invaded by Big Government than any in human history. The impulse has been there, from Hitler to Stalin to McCarthy, but the tools have been a bit lacking. The military has all the money, so they are devoting it to things like the total control forever fantasized by those who want total control. 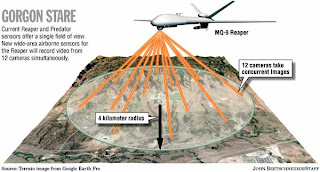 The latest is Gorgon Stare, the drone developed method of locking everything into the sights of the military, starting with a city and moving from there. From today's Washington Post:

With the new tool, analysts will no longer have to guess where to point the camera, said Maj. Gen. James O. Poss, the Air Force's assistant deputy chief of staff for intelligence, surveillance and reconnaissance. "Gorgon Stare will be looking at a whole city, so there will be no way for the adversary to know what we're looking at, and we can see everything."

Of course the US military will decide what cities and who might be their adversaries. Kandahar? Oh, cool. That's over there, lock it down, make it so everyone is on camera when they can see sky above them, and so the military analysts won't have to guess where to point the missiles--er, cameras. Mogadishu? Great. Aden? Damn betcha. Prolly need to keep an eye on gay old Paree, too. Gorgon Stare down! Portland and Minneapolis will need to contend to be first US city so serviced. Portlanders may win that one, what with our failure to worry about terrorism so evident in our extrication from the Joint Terrorism Task Force in 2005.

This is what transpires when you ask the military to tell us, tell us, tell us everything you might ever want! No, really! Our stupid working class and evaporating middle class exist to fund you! Indeed, we work until somewhere between April 9 and May 17 every year just to pay our taxes. Since most of our taxes are federal and since the military gets about half the money withheld every year from your paycheck, that is a lot of our work year just laboring to slosh $trillions to the Pentagon. No fantasy is too outlandish for them.

As the nation pushes deeper into "recession" and more and more Americans are out of work for longer than two years, even as the war system rewards the elite owners, we will have to ask ourselves how this violence approach is working for us. On the nonviolent side we believe in transparency, not in invasion and occupation and becoming the Gorgon Staremaster of the world. This misallocation of massive resources is not endless, since it is how we hollow out the economy to the point of collapse. Housing bubble? Stock market bubble? What we really have is a Reliance upon Violence Bubble and when it bursts, woe unto America. A smarter plan would be Whoa unto America--stop funding the imperial war machine and start funding sustainable global citizenship for our nation and our people. Can we make 2011 the year we turn that around?
Posted by Tom H. Hastings at 2:47 AM