Our duty despite the evidence 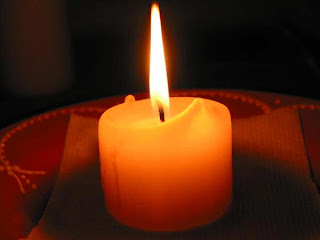 Last night I went to a peace meeting and at some point in the discussion I raised my hand and was eventually called on. I started to talk about the use of media in promoting nonviolent struggle and how that helped recruit more sympathizers and helped lead to some victories. I was interrupted by a woman who has been an activist for as long as I have--decades--and she went into a long harangue about our failings, our lack of victories and achievements and that she had no hope and that organizing anything was not worth it. Since she had interrupted me, I continued to try to finish my thought for my final sentence, but she kept talking over me and someone said, "Listen to her, Tom." I did. Her statement turned that meeting around. When someone else tried to say something, she responded. When a group self-facilitates that poorly, so that amongst 25 or so in attendance one person is allowed to respond in turn to everyone, that meeting is victim of a self-fulfilling prophesy and is indeed not worth the time. When she responded to yet another person and the group allowed her to dominate it, I felt called to the kitchen to do dishes, which was a much better use of my energy.

Why would anyone hope and continue to organize when things were hard? Isn't that the time to sensibly give up? I think Cesar Chavez thought about that and made his clear and lifelong decision.

We are suffering. We have suffered, and we are not afraid to suffer in order to win our cause. 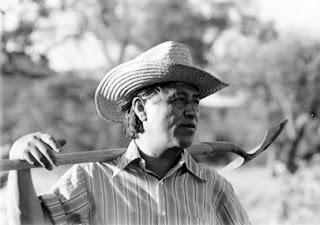 Chavez went on to say:

We have suffered unnumbered ills and crimes in the name of the Law of the Land. Our men, women, and children have suffered not only the basic brutality of stoop labor, and the most obvious injustices of the system; they have also suffered the desperation of knowing that the system caters to the greed of callous men and not to our needs. Now we will suffer for the purpose of ending the poverty, the misery, and the injustice, with the hope that our children will not be exploited as we have been. They have imposed hunger on us, and now we hunger for justice. We draw our strength from the very despair in which we have been forced to live. We shall endure.

Indeed, when the poorest of the poor, the most downtrodden with the least reason to hope, when those people decide, en masse, to get a job done, they succeed far more often than they fail. I'm glad Cesar Chavez didn't look around him at the overwhelming racism, poverty, injustice and decide not to organize.

I think of the Revolutionary Association of the Women of Afghanistan (RAWA) who keep struggling year after year against the obscene injustice of the religious fundamentalists in Afghanistan, whether they are Taliban or whomever. These women have been attacked physically, morally, emotionally, financially, and as mothers, wives and daughters. They have nothing. No money, no schools, no jobs, no social safety net and no power that is discernible or traditionally understood. Yet they never give up.

Never. They oppose US and NATO occupation just as deeply as they oppose the violence and brutality of the fundamentalist Islamists who rule when the invading foreigners don't. They have no reason to hope. I'm sure the woman from last night's meeting would tell them to stop. I'm sure they would tell her to please be quiet and let the planning proceed. And I have enormous hope that RAWA will prevail against all odds.

Hope is our duty, despite the evidence, despite the string of hard results and losses. Hope, sometimes, is the only thing we have left.

To be a Negro in America is to hope against hope.
--Martin Luther King, Jr., Where Do We Go from Here: Chaos or Community?, 1967. 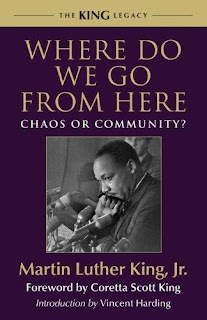 Anyone who is working for a better world has hope. Anyone who has no hope should stay home or at least stay silent and allow those who have ideas and intentions to figure out what to do next. The sociologists who study social conflict and movements have pointed out again and again that the best way to recruit is to give hope, what they called raised expectations. We who come out in hope and dreams are not little children who need patronizing--or matronizing--protection from our own futile ideas of what might be possible. We need help, we need support, and we need everyone's contributions to the brainstorms that lead to new plans for change. Without everyone's creativity, we are poorer and slower to win.
Posted by Tom H. Hastings at 10:39 AM

I felt torn between going to the Peace House potluck/movie night versus the gun violence/gang violence "Purple Passover" event at the UU Church. I think Nancy and I made the right choice. Although we both agreed that there should be a stronger connection made between our wars and the increasing gun violence in our streets and gun suicides in our homes, overall we left feeling some hope, more than the peace activists at the meeting you went to did. There's so much more work to do, now is not the time to loose ourselves to despair. If we must stand each night with a lit candle, not in hopes to change the world, but as AJ Muste did, to make sure this world doesn't change us, then that is what we should do.

Yes, you did make the right choice, IMHO. Good connect to the AJ caveat, exactly on point. As always in Portland, there was yet another great opportunity, to see Bill Hartung at Powells. Makes an activist feel a little schizy, all these wonderful choices. It's so much harder for folks who live in, say, rural Kentucky or where I used to live, in Webster, Wisconsin. If you lose hope in Portland, there's no hope for you! We all owe Alexa and her generation all our hope, however, period.