Historian William Loren Katz brought to my attention the egregious misuse of the memory of Dr. Martin Luther King Jr by Pentagon counsel Jeh C. Johnson on 13 January 2011. In his speech about Dr. King, Johnson incorrectly claimed that, were he alive today, Dr. King would have supported the wars in Iraq and Afghanistan. 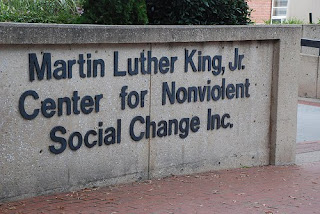 This is positively Goebbelian and Orwellian in its bald backwardness. Of course, what do we expect from an institution that has chaplains bless atomic bombers in the name of Jesus, as they are about to go incinerate scores of thousands of civilians? What else is new for a warrior organization that--in a mirror image of al Qa'ida or the Taliban--drenches its rhetoric in pseudospirituality, sending in born-again Marines with white phosphorus weapons to burn people alive in Fallujah? The evangelicizing of the US military toward a view of a heavily armed, vindictive Jesus is a well documented phenomenon, so why would we expect anything different when it comes to warping the memory of Dr. Martin Luther King Jr?

Just for the record, Jesus and Martin Luther King Jr were nonviolent. Hello? The Prince of Peace did not fool around when he noted that those who live by the sword die by the sword. He not only refused armed protection, he reputedly healed the Roman slave, Malchus, whose ear was cut off by one of Jesus's well meaning followers. Whether Jesus did this or not, his words as we read them in the Bible were all about healing and forgiveness, never about using violence to attack or defend. He carried no weapon except his own personhood. Martin Luther King Jr agonized and prayed over this very question in the 1950s, 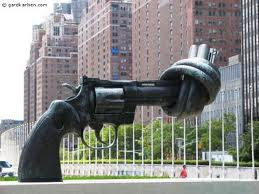 when his home was bombed on 30 January 1956 and he owned a handgun for protection of his family. King's prayer resulted in his own disarmament, when he and Coretta made the decision that advocating for nonviolence meant that he could neither have a gun nor have armed bodyguards, a very radical departure from the norm but one he clearly felt was a watershed in his own effort to live a truly spiritual life in accordance with his faith.

Donald Rumsfeld lied about WMD in Iraq and he lied about Saddam Hussein being in cahoots with Osama bin Laden. Pentagon spokespeople lied about the Gulf of Tonkin and the lies stretch all the way back to the casus belli of the Spanish American War. They lied about the dangers of radiological weapons to humans, about the effects of Agent Orange, and about Gulf War Syndrome, denying compensation to foreign civilians and US military personnel alike. Why would we expect the officials at DoD to suddenly start telling the truth about Dr. King or anything else? When they are caught in those lies, they stutter about bad intelligence or unclear circumstances, but the pattern is stark.

I know soldiers and Marines who really have gone into these wars with intentions of helping, and often they do, exhibiting great skill and care. We've talked and we've agreed to disagree about the necessity of being armed, but I will freely assert that plenty of US military members really strive under dangerous circumstances to help Iraqis and Afghans on the ground, in the countryside, villages and towns. What I find such a betrayal is that their commanders at the highest levels continue to manufacture false statements about so much and thus put civilians and US troops alike at greater risk. Dr. King was clear as a bell that a nation that continues to spend its treasure on military adventures while cutting social programs is approaching spiritual death. The Pentagon is pushing us toward that spiritual death even as it is shoving our environment and economy over the cliff. 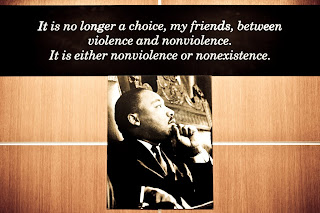 It is time to take King seriously and rethink our entire notion of security. His vision has a future for all. The Pentagon vision is a nightmare of lies and violence.
Posted by Tom H. Hastings at 9:49 AM