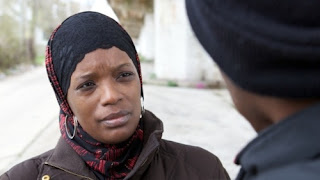 In the great documentary The Interrupters, Ameena Matthews describes her inner escalation during her desperado years--coming out of her segregated gangland neighborhood with no real opportunities for much beyond hustling in a nearly lawless environment--as going from zero to full rage in 30 seconds.

All of us have seen that happen, many of us have experienced that, and it goes to understanding our emotional triggers and those of others. What are the techniques of deëscalation, then, that might help in those dicey situations? If we can learn to have a positive effect on that sort of episode, we can apply deëscalation skills to many other situations that might appear to suddenly erupt in our world.

One of the responses that is never advised is: "Calm down." The response to that is likely to be a bellowed, "I AM CALM!" Why? Because if I do that to an enraged person I have shown no appreciation for why that person's triggers have been pulled. I am patronizing and that only increases the frustration and, very quickly, the rage. If I was not one of the targets of that person's rage before, I am one now.

The efficacy of deëscalation is something many of us have experienced first-hand and some have studied it professionally.

Alison Mueller, as part of her graduate practicum at Nova Southeastern in 1995, designed and implemented a series of verbal deëscalation trainings for staff working with young children in an agency. In her report, she noted that not only did staff use physical containment or restraint much less, the incidence of aggressive behavior in the children decreased.

Stopping the escalation from zero to full rage is like much of nonviolence, that is, using the force of the aggressor to effect the transformation. Rather than rising up against someone who is quickly losing his or her temper, use what is known in the world of nonviolence as psychological jiu jitsu, which in this case is most often most effectively done by pulling on it, i.e., validating that escalation rather than pushing back. Pulling it forward by eliciting information rather than pushing against it by issuing information is far more effective in most cases.

Tell me more about this. I'm interested. I want to know the sources of your anger. What is frustrating you? OK, can you tell me more? Ask a follow-up question. Show you hear. Show you are participating. Show the person whose opinion has been so ignored and trampled over that, for once, s/he is being actively heard. You don't have to say, "I care." Your inquiries will show that you do.

Of course, there is much more to deëscalation, and one might learn a raft of such skills by reading, by attending trainings and by engaging in minor deëscalation and roleplays. Practice this with family and friends, co-workers and fellow activists. Many of us tend to escalate and learning how to deëscalate others can help us on our own journey, with our own problematic behavior. I will testify to that. I need training frequently. I think many of us do. And if we can proliferate that training with realism and humility, we can change our culture.