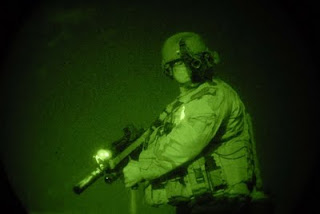 As we approach the 10th anniversary of the most massive terror attacks on the US, it is time to reflect on how we, as a nation, have changed in that decade. In many ways, it is hard to be sanguine about any of those changes.
Now comes a book from Bill Arkin and Dana Priest, Top secret America: The rise of the new American security state. In a Washington Post piece adapted from one of the chapters, the authors describe the post-9.11.01 spectacular but cloaked growth of the U.S. military’s Joint Special Operations Command, known by the acronym JSOC, into a massively funded kill force with even more reach and less visibility than the CIA.
It is an illegal operation, ordering and committing killings wherever deemed desirable. Arkin and Priest write:

Two presidents and three secretaries of defense routinely have asked JSOC to mount intelligence-gathering missions and lethal raids, mostly in Iraq and Afghanistan, but also in countries with which the United States was not at war, including Yemen, Pakistan, Somalia, the Philippines, Nigeria and Syria.

And coming soon to a homeland near you.

We are living in a rogue nation. If another country did this sort of thing we would be outraged. Instead, we fawn over each member of the military in 'service' to 'the country', ignore the routinely scandalous war profiteering by corporations who get away with gouging the wink-and-nod Pentagon, and re-elect the politicians who authorized all of it. We pay our federal taxes without a murmur (except to grouse about too much soft-headed liberalism that gives a comparatively tiny amount to those in need) and we remain quiet and willfully ignorant. The past 10 years have moved us in precisely the wrong direction in almost every way possible.

But what can we do?

Last night we watched Pray the Devil Back to Hell, a film about how the women of Liberia Just Said No to any more war. One social worker and one cop--a Christian woman and Muslim woman respectively--launched a campaign that ended one of the most brutal civil wars and regimes on Earth. They were poor. They were just folks. They were powerless until they decided they weren't. They changed their world. Hello? It's about unity and persistence, not about waiting for those in power, who profit fabulously, to change. We must do it if we want it done.

Email ThisBlogThis!Share to TwitterShare to FacebookShare to Pinterest
Labels: Bill Arkin, Dana Priest, JSOC, Pray the Devil Back to Hell