There is a new fascinating video, Better This World, available online, with many themes that relate directly to the formation of a violent terrorist from a young person who is given some good values in a vacuum by parents who offer platitudes but no emulative examples and leave the young person to find those examples elsewhere. The results are tragic. 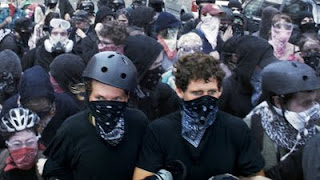 Two young men from Midland, Texas, are the central characters of an incidence of domestic terrorism, a plot to build and detonate bombs in the 2008 Republican convention in Minneapolis. They went to prison and clearly wanted to do this.

Who will take over from the parents when they bring the children this far? Mass media will serve up movies that show how to handle bullies--nearly 100 percent of their 'solutions' are violent. The military, affirmed to mythic proportions by society, will teach youth how to accomplish defense of democracy, human rights, and how to stand up to tyrants. Children are saturated in the violent methods and they seldom get serious instruction from parents or teachers of the preferable alternatives, the nonviolent commitment and skill sets. So, as the film also shows, the politico heavies from left or right are also ready to more seriously instruct idealistic youth how to engage in conflict--you go straight to what the enemy understands. that is, violence.

Finally, in the US, the FBI is all set to finish off the process for any who have been convinced that the violent methods might be for them. Whether it's a young Somali American angry at the US militarism killing Muslims--as we saw in my town, Portland, Oregon, last Christmas season--or young men from Texas who want to stop US attacks on others overseas, the FBI responds to ideation with entrapping provocation and enabling operational support.

The lesson, I think, is clear. It is not only not enough to give children as sense of anger at injustice and a notion that they should do something about it, it is clear that parents and teachers (yes, even kindergarten teachers, though Ann Coulter has labeled them 'useless public sector workers') will either teach children the methods of nonviolent conflict practice or risk losing them to the terrible practices of the far left, the far right, or the religious zealots, and then into the clutches of the FBI. The boys in this film were regular kids from normal American homes. The caveats should be obvious. Teach your children well; nonviolence is both an imperative value and a set of competencies every child can learn. As a peace educator, I can report that those who engage in violence--either military veterans or former inmates--enroll in my classes quite often, trying to find more appropriate methods that they were never taught before. I'm happy to try, but these methods are best taught beginning at infancy.
Posted by Tom H. Hastings at 7:32 AM