What we've squandered with violence

Nonviolence is naive, unrealistic and when someone attacks you, just a sign of weakness. That is the common perception.

But what is the uncommon perception of nonviolence? Using prospect theory, it is far better than violence. Prospect theory suggests that framing our alternative as the best from amongst lousy alternatives is actually more persuasive than trying to claim too much for our preferred direction.

It's true. Nonviolence would have been a lousy response to the atrocities of 9.11.01. It would have given no cathartic help to a wounded nation, to a damaged national assessment, to a self image of a pitiful giant unable to defend against 19 nihilistic nutcases with box cutters, let alone to the families of the nearly 3,000 who perished in these unconscionable attacks. It would have been the worst response.

Except for all the rest.

In the aftermath of such low-down attacks on noncombatants (with the exception of the Pentagon, a legitimate target if you like the Just War doctrine) the world sympathized strongly, including the Arab world and even Cuba. Most of us knew just how short-lived that would be, since Bush was clearly a rightwinger whose bread and butter was a violent reaction to threat. We held our breath for a month and, sure enough, he ordered the attack on Afghanistan, civilians were amongst the first casualties, and the planetary goodwill was destroyed along with our 'make the rubble bounce' air strikes on an impoverished nation already supine from years of anti-occupation insurgency followed by warlord civil wars fueled by tribal animosities. 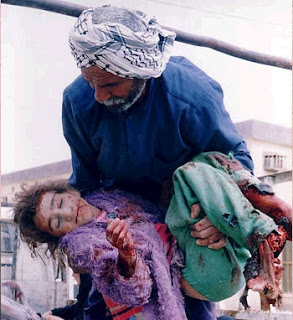 All the lives, all the natural resources, all the money--squandered along with the goodwill. All the trust in government, all the robust civil rights, all the ideas about America being above conduct like torture--squandered along with the rest. The total catalog of all we squandered by our violent response to the horrific acts of terrorism far outweighs the lack of vengeful glee we were supposed to get, or the sense of justice that is so often the excuse for violence. Indeed, getting justice with nonviolence is becoming the norm in so many arenas of life, from the political to the interpersonal to the international, yet we squandered it all.

There is one way forward. Nonviolence, as unsatisfactory as that may be to many. It squanders little and gains a lot, even as it makes the next atrocity much less likely. It is the future. The recent decade is the past. Let's leave it and move on.
Posted by Tom H. Hastings at 9:43 AM