No guts, no second term

The Tea Party could have been a tiny afterthought, ridiculed or ignored by the many Republicans who switched to supporting Barack Obama.

President Obama could have been riding high on approval ratings that virtually guaranteed his re-election in 2012.

These two things would have been logical sequelae to his brilliant first term if his first term had featured serious political courage instead of mere charismatic speechmaking. Barack Obama is a coward, unfortunately, and unfit to really lead. He might have made a fine president in an easy era of prosperity and fat surpluses, but he is a poor choice when it comes to choosing a champion, someone who will fight for the people instead of caving in to the likes of John Boehner, Mitch McConnell, Lindsey Graham and the other crackers. Indeed, Barack Obama could have shown the world how to eclipse the job growth rate of Texas under Rick Perry only by making the environment cleaner, not dirty like Perry, and by improving health care, not making it inaccessible like Perry, and by strengthening education rather than cutting it and dumbing it like Perry.

How? How could our first black president have possibly achieved all those things in the aftermath of a Bush warmaking spending spree that wasted so much of the gas from the tank?

Well, he would have needed to come in swinging, ready to fight, politically, for the people, instead of ready to compromise. I teach in the field of Conflict Resolution and the basic negotiating lesson here is that you always compromise on those items which can be shifted around until everyone gets a fair deal, but you never compromise on basic ethical principle. Barack Obama could have had the principle that the welfare of the people comes before the welfare of the owner class. He could have assembled a scrappy team that knew how to frame legislation that would be radical in its shifts toward benefiting average working people. There are historical precedents, of course, and he could have used them and improved them.

Barack Obama inherited a major economic mess, created for the most part by the Bush regime. When Franklin Roosevelt inherited a disastrous economy created by Republican lack of governmental regulation, he made bold new policy that put millions to work building infrastructure still enjoyed by all Americans and everyone who visits, from park lodges and trails to beautiful bridges. Roosevelt didn't do that by turning over $ trillions to the same financiers who had created the Great Depression. He created government programs that put people to work, making the most of the skills they already had and teaching skills to young ones. 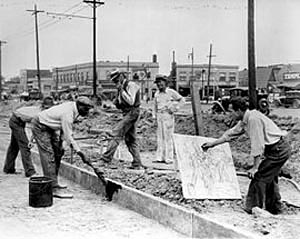 The Civilian Conservation Corps operated from 1933-1942 and focused on providing work for some 2.5 million young unmarried men, on projects that conserved and developed natural resources on public lands. The Works Progress Administration operated from 1935-1943 and provided about eight million jobs, focusing on the goal of one job per family where they had been unemployed for a long period. Updating these sorts of programs to reflect our current gender mores, population growth, and infrastructure needs would be a hard sell to a Republican Congress. But Barack Obama is going to to have a harder sell to the vastly hurting and disappointed America electorate if he can't make those sorts of hard sells to other politicians.

Roosevelt gave folks what they needed. His base was so huge he couldn't lose, even though corporate officials dreamt of his ouster. His radical executive moves provide a blueprint and that blueprint has so far been ignored by Obama. His paradigm is closer to Rumsfeldian--privatize everything that the government does in order to massively enrich the owner class--than Rooseveltian, which angered the owner class and saved working families.

Can Obama grow a backbone and save anything at his late date? Stranger things have happened, but so far all his moves have been classic cave-ins to bullies. We usually elect people who will stand up to bullies. We thought he would and, so far, we have been wrong. We'll see how this plays, starting with his upcoming speech. It will either be a revolutionary departure from his corporate bailout model or it will fall flat in failure, and his fate will be sealed.
Posted by Tom H. Hastings at 9:02 PM