In our adversarial culture we are frequently caught up in conflict, whether that is interpersonal or social conflict. It might be spontaneous and avoidable or in our face and threatening. There are steps and theoretical concepts involved in constructing some line of sight from destructive conflict to constructive conflict.

By definition, constructive conflict is problem-solving, reducing or eliminating losses for all parties, strengthening the possibilities of collaborative learning, building mutual respect if not fondness (this is not about taking vacations together--except in that deteriorating marriage, though that is exactly what some of the Palestinian and Israeli peace negotiators did during the Oslo process, a remarkable if ultimately failed bid toward transformation), and possibly even creating a mutually acceptable win-win outcome.

Many conflict analysts describe the underlying issue to many conflicts--even those apparently about nothing but resource distribution--as perceived lack of respect, or disregard for "face" of the other and regard only for face of oneself or one's group. That is the first step toward a transformative conflict management design, then, to assert respect in all transactions, all contacts and contexts, and all characterizations of all parties.

The second step is ceasefire, interrupting violence or verbal attack, and deëscalation.

Fourth, agree that in future conflicts there is an appropriate entry point into the transformative system that exists between two people, two groups, or any permutation of conflict parties. Make conflict avoidance a normative negative, even if it only means that the parties register the need to talk but note that current constraints make that a lower priority. Unannounced need to manage conflict--"gunnysacking grievances"--is the path to destructive conflict, passive-aggressive behavior and an unraveling relationship. Why persist in this? The end result is violence of the direct or structural sort and violence prevention is a key aspect of promoting nonviolence.

Each conflict system is unique and requires particularized design. Working out an organizational system of conflict management is a more complex undertaking than a dyadic conflict management agreement ("We agree to devote Sunday dinners to squaring away any conflicts that arise during the week"), often involving special offices and agreed-upon routes of grievance management. 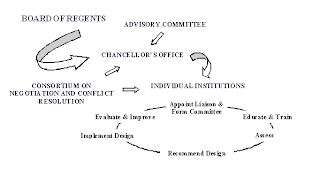 As conflict management systems become commonplace rather than exceptional, society will shift toward nonviolence. This normative change will auger a transformation toward a peace culture and away from a war culture, the Holy Grail of Nonviolence. We can promote this systemic approach in our interpersonal, work, family, community, educational institutions and world lives. It is classic enlightened self-interest.
Posted by Tom H. Hastings at 9:36 AM