Hate the gun, love the cop

“Fraternization was an important part of the opposition’s strategy.”
--Erica Chenoweth and Maria Stephan on the Iranian nonviolent revolution of 1978-79 (2011, p. 107). 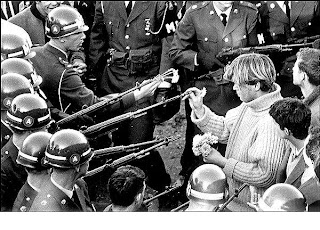 In planning any campaign to change society, we must anticipate the role of armed agents of the state, whether we are violence interrupters on the streets in Chicago or Serbs trying to overthrow Milosevic. There will be a long line of interface with members of the movement and these cops or soldiers. It is best to make friends.
What!? Friends with sociopaths who commit murder and get away with it? That is like telling Jews to kiss up to Nazi SS.
No, it's not. The most functional strategic nonviolent movements insist on respect from these armed agents and they show that they give it too, but just as conditionally as ought to be expected.
Watch the film The Interrupters, a documentary about Ceasefire Chicago and their struggle to reduce violence in the combat zones of the South Side and West Side, gangland turf. They are masters of the art of relating to police, challenging them and dialoging with them, never giving up anyone to them but never disrespecting them. Like the Israeli negotiator who asked the Egyptian negotiator (during the 1978-79 peace process launched by Jimmy Carter), "What do you think my people will say if I tell them what you demand?" and the Egyptian official laughed and said, "They will dismiss you," so too the Ceasefire conflict workers have taught the Chicago police that the role of Ceasefire on the streets has earned and deserves respect. At the same time, Ceasefire is able to demonstrate to gang members and others that they are not snitches, but are only interested in reducing violence on all sides, including violence by the police. The War Resisters League offers a nice little 10-minute training for US activists as they are in the street in resistance to poor public policy covers many key principles and culturally appropriate tactics.
In 2000 in Serbia, the youth movement, Otpur ("Resistance") made a strategic decision even before they went public that they would never wear masks, taunt cops or soldiers, or call them names. At the same time, when police and soldiers did commit acts of violence or unwarranted arrest, Otpur activists would show up en masse to challenge the oppression, but with a unique synthesis of redirecting blame upward to Milosevic and protectiveness of each activist being persecuted.
Filipinas did this successfully in 1986, interposing with love and bravery between the army and a breakaway faction of the army, stopping a civil war.
As Chenoweth and Stephan point out, Iranians did this when deposing the Shah and his brutal regime, using mass nonviolence after the violent insurgency failed repeatedly. They even emulated US youth from the 1960s who put flowers in the gun barrels of soldiers.
The whole point is to prepare the security forces to defect. This is almost never something that generates much direct evidence until it occurs openly and massively. Approaching this as a matter of faith is adaptive, as the record shows it not only helps toward victory but it keeps casualties much lower in the process, plus it makes post victory rapprochement much easier and a changed society much more stable and secure.
References
Chenoweth, Erica, & Stephan, Maria J. (2011). Why civil resistance works: The strategic logic of nonviolent conflict. New York, NY: Columbia University Press.
Posted by Tom H. Hastings at 8:14 AM

Email ThisBlogThis!Share to TwitterShare to FacebookShare to Pinterest
Labels: deescalation, police, The Interrupters

Interesting video - thanks for sharing!

Yes, and I know from some decades of doing this that their information is good. I admit I'm a bit suspicious of other trainers who may or may not have some other agenda or analysis, but these two trainers are correct by my lights. The only risky tactic is the voice volume match, which may present a moment of danger--and sometimes a moment is too much. I understand their logic, just not convinced of that one piece.