We all negotiate every day. We come in three basic models.

Some of us are Minnesota Friendly soft accommodaters who give in so that we can (we think) preserve our great relationships (OK, so Jesse Ventura and Michelle Bachmann have destroyed that image). We surrender to make nice.

Some of us are Louisville Sluggers who regard anything other than ultimata to be clear and present danger signs of weakness. We get elected to Congress nowadays and grind the economy and the government to a dead halt. No deals! Our way or the (rapidly crumbling) highway.

Some of us strive for an alternative to either of these styles. Fortunately, these bookending dysfunctional approaches of negotiation have been easily and blessedly surpassed by Principled Negotiation, the heart of a little book first published in 1981called Getting to Yes: Negotiating agreement without giving in, by Roger Fisher and William Ury. 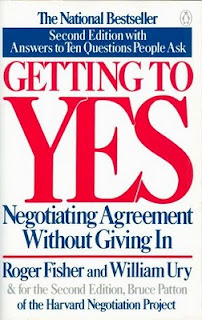 The method is four basic parts:

Try it. Next time you are in a conflict, instead of emulating Caveman Obama (caving every time the Republicans shout 'Shut It Down!'), be assertive. Or, instead copying Dubya the Decider by telling your opponent that he's either with you or with the terrorists, see if you can reframe the conflict as a problem for both of you, which should be easy, since that's exactly what it is.

Then find options for mutual gain--this is actually a much longer process than a Quick Fixer might like. Take a bit of time and actually explore, brainstorm, see about all the wild ideas and then evaluate them by two criteria, fairness and practicality.

When you seek fair independent standards you do so together. The law, a mutually respected authority, or some negotiated standard is the filter through which all solutions must successfully pass.

Really. This stuff works. Give it a go. It works on the street and it works in the suites. Some say principled negotiation is a conflict causation theory in competition with other theories, and that is one helpful view, but in fact principled negotiation can help us in conflicts with very different etiologies.
Posted by Tom H. Hastings at 4:37 PM

Email ThisBlogThis!Share to TwitterShare to FacebookShare to Pinterest
Labels: Getting to Yes, principled negotiation