It's only natural: Violence and corruption or peace and life?

The blowback never stops. We fund the Taliban in the 1980s and they harbor al Qaida, leading to 9.11.01. We fund the armed rebellion to overthrow Qaddafi knowing that a wing of that rebellion is associated with al Qaida. And we paid tens of $millions to the Taliban last year so they would let some of the supply trucks through in Afghanistan, money that was then used to arm Taliban fighters who kill Americans--and the military plans to do it all over again in the coming year.

Violence. What a great method of conflict management. It's the only practical plan when confronted with unreasonable people, right? It works for Rocky, Jean Claude von Damme, and the Terminator and it has always worked for us--except when it hasn't.

Violence was a giant loser in the war of my generation, the war the US lost in Vietnam.

Violence was a total loser when racists from the Deep South punished African Americans for their uppity ways in the Civil Rights movement.

Violence was a complete failure when many African Americans lost their nonviolent discipline and changed the Civil Rights movement--based on nonviolence and inclusivity--to the Black Power movement, rooted in rioting and violent self defense and based in hatred.

Violence can force compliance if enough of it is applied on a permanent basis. Great. What a sustainable solution that is. Israel occupies Palestine. China occupies Tibet. The US occupies Iraq and Afghanistan. All this is done through violence and requires permanent application of violence to maintain. Without US military aid, Israel would have been unable to do this and would have needed to negotiate in good faith. Next week in the UN we will see the results, as Palestine seeks recognition as a sovereign nation, albeit under occupation or siege.

And the new world order that the US has been attempting to impose by violence is about to give way to a very different newer world order that either relies on nonviolence or a new world chaos that sticks with the old trusted method of destroying lives and property in order to make others do our bidding.

Violence is Just So Olde Millennium. 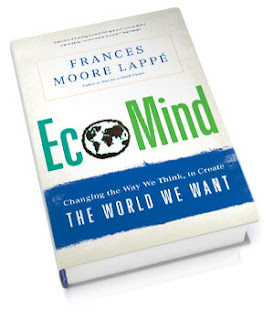 Nonviolence is the Way of the New Millennium. 21 is the age of adulthood, if not real maturity. The 21st century is the Age of Nonviolence as we struggle toward a mature culture. It's the Age of Reason 2.0 and reasonable societies learn to resolve their differences using nonviolent methods. This is the difference between the New Scarcity or the New Stable Sustainability, not based on stasis, but on a new ecomind, as Frances Moore Lappé describes in her new book by that name, about which she spoke at Portland State University.

Lappé notes that ecology is about living relationships, not a dead static tableau. We live on a planet of enough if we are smart enough. She says we are already good enough, and if we avoid the thought traps of defeatism we can outsmart our old mechanistic selves and synthesize the old indigenous with the new appropriate tech. It comes down to avoiding the trap of certainty. I know we've reached ecological disaster. I know we will collapse of our own militaristic inflexibility. Or, on the other hand, I know God will save us. I know that Mother Nature will be fine. She says to go from the certain victory or certain defeat to "This is possible." Indeed, she calls herself a "possiblist."

How can we stop our insane bloodletting in Afghanistan and our fiscal hemorrhage to both sides of all these wars of occupation? Listen to Lappé. Refocus on sustainable ecological thought process. As John Muir wrote a century ago, When I pick up anything I find it hitched to everything else in the universe, and as Aldo Leopold titled one of his bellwether essays that augered his Land Ethic, "Thinking like a mountain." Lappé is telling us to think like life, like ever-growing, shifting, changing relationships rather than like a frozen moment.

If we do, the world will shift to nonviolence rather than lurching and staggering under the weight of violence.
Posted by Tom H. Hastings at 4:58 AM