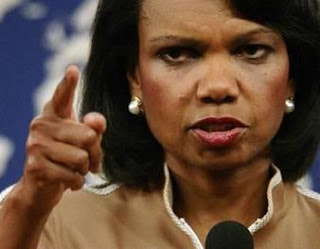 Condoleeza Rice is coming to Portland to deliver a keynote address at a Portland State University function this October 19. She was part of the team of top officials who told lie after lie to persuade the American people to allow her boss, Bush, to order the illegal invasion of Iraq. International law expert Francis Boyle has filed charges against six officials, including Rice, for ordering rendition and, ultimately, torture. The Women's International League for Peace and Freedom supports Boyle's filing in a story in their newsletter (p. 18).

The Bush/Cheney/Rumsfeld/Rice team made sure that the US 'unsigned' the Rome Treaty--joining Sudan and Israel in that gesture--that created the International Criminal Court (which currently has 116 of the 193 UN member states as ratified signatories), so it is unlikely that Boyle's filing will result in any trial for war crimes or crimes against humanity, but that only shows, again, that the US is in the minority who refuses to prosecute war crimes if they are done by top US officials.

What I haven't found out is whether Dr. Rice will get an honorarium. If not, I support her appearance, especially if she will dialog with others who wish to respectfully question her about her activities on the world stage. If so, I am aghast. To pay money from a university that struggles financially every year to bring in someone who helped engineer a war and justified torture is beyond reason to me.
Posted by Tom H. Hastings at 10:36 PM

Tom, I agree that inviting Rice or any other of these Bush cronies to PSU is fraught with risks for the institution. The biggest, by far, is that these ex-Bush officials have repeatedly denied their responsibility for the decisions they personally made, and they have reframed any questions about their actions as attacks against America or as statements in support of terrorism. I am always in favor of an open dialog and so inviting Rice to speak is not, in-and-of-itself, a bad decision, BUT the university MUST demand of Rice that the take questions from all sides and MUST demand that Rice answer questions in the spirit of the university (i.e. with due consideration to openness, honesty, and education). Rice should not be allowed to use a university setting to spout the same old Bush administration lies about the wars or torture and she should not be allowed to attack a questioner or refuse to answer a question based on her perception of their political motives. Open dialog or no dialog!

Well said, John. You express my fear of the propaganda rather than dialog.