Toward a nonviolent transformative federal budget

If we ignore it, will it go away? Yes, the parts of our budget devoted to health, education, infrastructure, environmental protection and safe energy will indeed go away. The National Priorities Project, a public interest research group focused on federal budget implications for the lives of Americans, offers one recent and currently contentious example, the fate of the Pell grants for low-income students who qualify for enrollment in academic programs but who lack the resources to pay for our expensive higher education. This is up for grabs as Congress returns from their recess and takes up the annual fall budget appropriations. 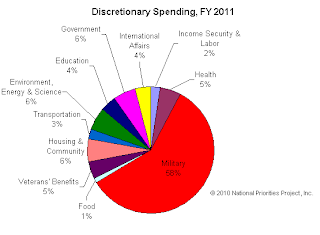 Will Congress cut some of the fat out of the obese Pentagon budget that enables us to wage wars all over Earth, to keep hundreds of thousands of boots on the ground or drones in the air on or above so many countries? Will Congress cut budgets for overseas US military bases that intrude on the sovereign soil of other peoples' nations and irritate so many people from so many lands?

Or will they look at the vulnerable ones, the ones without lobbyists, the ones who represent bright minds trying to emerge from poverty? Will Congress take the cowardly bully road, cutting programs that benefit those who have no apparent power, or will they take the high moral and, frankly, truly enlightened national self-interest path that will require courage and high ethical standards?

I think we all know the answer, if left to their own devices, sad to say.

This is why any transition to nonviolence in our conflict management methods is tied to a transition in our participation or lack thereof in our political process. That power is on the table. Will we cede it once again to the greedy class or will we use nonviolence to move toward more nonviolence? Congress is coming to their decision point and it will depend entirely upon our reaction to our choice point, here and now.
Posted by Tom H. Hastings at 11:46 AM

Where are these numbers from Tom? The Obama budget from the New York Times, not generally considered a right-wing publication, show numbers entirely different than this. Military spending is nowhere near 58%. What is your source?

The graph notes my source, the National Priorities Project. The military portion of the discretionary budget is routinely 45-60 percent. The inclusion of trust funds (Medicare and Social Security) is another question, which is what you see in the NYT. That is a strange idea, to take your SS withholding and then claim it's debatable budget item, for instance. The discretionary budget is what the Congress can vote on annually. It it the FICA withholding on your pay stub. This is all explained as well on the War Resisters League website.