Burma is the land of Daw Suu, the nonviolent leader of a partially completed nonviolent revolution. She is currently free (at least not on house arrest since 13 November 2010), though she and all who love her know that this has been the case before and that the military government could decide to put her back on house arrest or worse at any moment. She remains one of my all time sheroes. Her Reith Lecture one month ago brings me to tears.  Her discussion of various forms of freedom and the universality of the human longing for freedom is so poignant from a person who chose to risk her life and who has sacrificed so much for her people's desire for liberation. She says:


The freedom to make contact with other human beings with whom you may wish to share your thoughts, your hopes, your laughter, and at times even your anger and indignation is a right that should never be violated.

Every time a government violates these basic freedoms or allows elements of a society to violate them that government fails its people. Every time a government engages in this oppression, or allows others to do so to members of its society, it moves further from the right to call itself a democracy. Burma is, of course, an example of complete nondemocracy. Aung San Suu Kyi--Daw Suu is her honorific to her people--is the 66-year-old leader of her nation's long struggle for freedom, a struggle that has been armed and unarmed.

Indeed, her father, Aung San, was the military leader who freed Burma using both violence and negotiation, and his memory was revered, setting the stage for her leadership, though she has proven herself far more egalitarian and inclusive than her father, whose record is highly suspect amongst the Karen peoples. Daw Suu is loved by virtually all Burmese who aren't a part of the ruling military clique. Spend time with any Burmese and you'll realize her spirit infuses all of them, a spirit that is both gentle and immensely strong.

The long mixed history of violence and nonviolence in Burma has given the selfish, brutal military the excuse to do the inexcusable, to deny people that basic freedom toward which Aung San Suu Kyi leads them. The generals are trying to spruce up their image with "elections" that Daw Suu's National League for Democracy called a sham (even their foreign officers are agreeing as they defect and apply for asylum).

Moving long nonviolent struggles forward to victory often requires one of two things, and sometimes both.

One, the people of that country need to shut it down until they achieve victory, which is actually muddled with the ersatz elections in Burma.

Two, externals need to be unified and strong in their support for nonviolent freedom fighters, and that is increasingly confounded by the growing strength of the Chinese influence economically and politically, since China's authoritarian brand of state-run brutally enforced capitalism defies the general world trend toward freedom and human rights and their trade with the Myanmar (Burma) rulers undercuts all other sanctions. 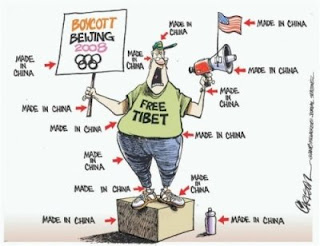 Thus, external sanctions on Burma have limited effect as long as China defies them and sanctions on China do not exist because we are too wed to cheap Chinese consumer goods, just as seemingly indispensable to our lives as oil, and thus we guarantee lack of freedom from Riyadh to Rangoon. Our struggle for freedom from hyperconsumerism is directly linked to humankind's struggle for all freedoms.
Posted by Tom H. Hastings at 11:26 AM