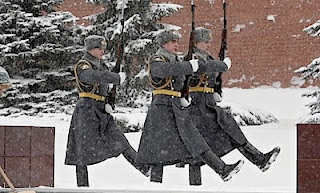 A US soldier in Mogadishu in 1993, in Falujah in 2005, or in Kandahar in 2011 is walking around in someone else's country full of people who never did a single thing against the US until the US troops invaded. Even in Afghanistan, a nation that harbored Osama bin Laden until he escaped to be harbored in a country we supported with $billions (Pakistan), few people were involved in that crime against the US. But once a military invades, the relationships between the peoples of the invaded country and the US change profoundly. Of course, the US soldier usually has no idea about that (if they did, they would quit the military and certainly not defend its actions later) because the US military members generally have zero experience living in a country invaded by any military.

How would we feel seeing Russian soldiers with big guns goosestepping in our streets? Seeing anyone with a big gun in your neighborhood is upsetting to most people. If that person is wearing the uniform of another nation's military, that is the ultimate humiliation, and it's astonishingly obdurate that we do not understand that. Are those who practice and believe in nonviolence the only ones who can grasp that concept? Some days I wonder.

Any conversation with someone with a gun is a different conversation than a normal, unarmed discourse. Uncertainty, fear, insecurity and hatred are normal concomitants to the discussion with armed people. Intellect is possibly present but is not the ultimate word. The gun pollutes everything. 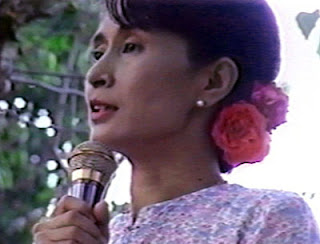 There is no true free speech with guns.
Posted by Tom H. Hastings at 7:51 AM