We are taught in Conflict Resolution that a good negotiator or mediator strives to get past the positions and really understand the interests of people (Fisher, Ury, & Patton, 2011).

We are taught that in most cases there is self-interest mixed in with altruism, and that, indeed, strategic altruism can prevail.

So, we wonder, how is it that so many powerful people seem to advance financially and politically when they are so aggressive and hurt so many others?

Only rarely does even one of them get a bit hoist on his own petard--we see a little of this with Rupert Murdoch's recent bit of bad luck, and a bit more with the assassination of corrupt Afghan druglord Ahmed Wali Karzai, half-brother of Afghanistan's President Hamid Karzai. 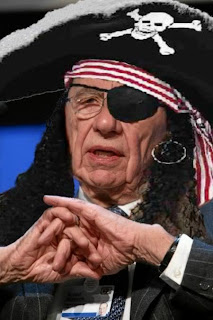 Our primary problem is our failure to realize our latent power as civil society. We could fix corruption and in Britain the Murdoch empire got away with its tabloid excesses as long as it targeted for titillation and only the celebrities whose peccadilloes are regarded as fair game. When the British people found that Murdoch's minions were hacking into the cell phones and emails of crime victims from amongst them, even including murdered children, they rose up.

Rose up. What does that mean? Why does it have such a negative connotation in the US?

We have a cultural image of rising up as a violent overthrow that wrecks lives, plunges the economy into chaos and hurts much more than it helps.

Actually, that is much more like the Republican approach to promoting democracy, and those economies that are ruined are done to enrich their elites at the direct expense of the citizenry of the target country and of the US. The Rupert Murdochs and Dick Cheneys of the world are perfectly fine with thousands of lives lost, millions of jobs lost and rampant home foreclosures, as long as the grotesquely high rate of profits continue to expand their personal wealth. And they bank on a flock of grazing sheep for citizens.

Their formula is simple:

Citizens need to achieve these things in order to win:

Using nonviolence, we can rise up and stay up. We can learn to tax the rich until the poor feel a part of a society that cares about them. We can learn to regard security as a clean environment and great education instead of massive and obscenely expensive arsenals.