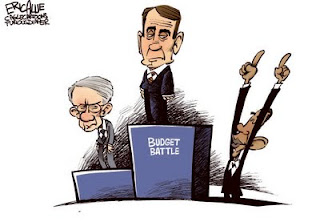 While the Ds and Rs squabble over raising the debt ceiling (something that has happened almost 100 times since 1917 and almost always without much controversy) one wonders how much of this is posturing for the home crowd--electioneering kabuki--and how much of the obdurate mulishness is partisan hardwired.

In the best case, they stonewall in public and cave right along, limiting damage to the average person, like stage fighters who snap their heads back in response to punches that never landed and who leap to their feet snarling after tumbling from nonexistent haymakers.

In the worst case they are Brandon Lee, shot to death by their own (mala)prop gun, in which case the US plunges economically even worse than the Bush-Obama mismanagement has produced to date. If they are playing chicken, they may need to be told when and which way to swerve or the fiscal crash will shock the world. 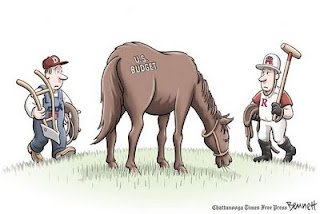 As Obama caves on Social Security and Medicare, Boehner stays firm against closing tax loopholes that allow corporate officials tax-free personal jets and thousands of other unearned sloshy benefits--though he stays just as firm in making sure that military contractors continue their plunder of all incoming taxes. As usual, the Ds are Little Miss Compromise and the Rs are the testosterone-saturated aggressors, pretending to have principles but driven by flat-out greed.

Stay tuned. Sometimes even the lunks on All-Star Wrestling get injured badly. Posing for campaign propaganda may be the fatal flaw that finally does to the US what popular antipathy did to the USSR. Let me be the first to wave goodbye to all the red states~~~
Posted by Tom H. Hastings at 12:30 PM