Survival: Because he has to 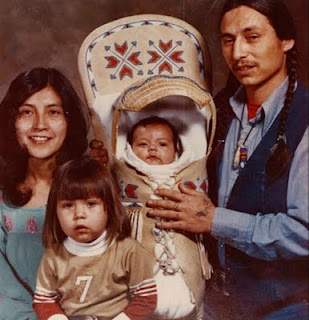 John Trudell is known by many, though perhaps we tend to be old politicos. He is a man I first heard 31 years ago at the Survival Gathering in the summer of 1980 in the Black Hills, Paha Sapa to his people, the Santee Sioux. We heard many speeches and much music over several days in July, none quite so powerful as his talk. He was in the zone, so to speak.

But there were more than 11,000 of us--ranchers, Native Americans, hippies--at the Survival Gathering. Just a couple hundred of us attended the Hempsted concert last evening. I suppose everyone else was at the Blues Fest, a great place to be, but I was so grateful for a chance to first hear Trudell and then to shake his hand and talk to him later as he mingled a bit before vanishing.

In Trudell's story, echoes of what we see now in China--brutality and threats so prompt and devastating that they are meant to silence dissidents--made an already complex man even more of a mystic enigma. The day after he led a protest on the steps of the FBI in Washington DC, including burning an American flag, arsonists torched the home of his in-laws, on the reservation in Nevada, where they, Trudell's wife Tina, and John Trudell's and Tina's three children were sleeping. All but Trudell's father-in-law burned to death. The children were Ricarda Star, 5, Sunshine Karma, 3, and Eli Changin Sun, 1.

I'm sure I've missed some of what Trudell has advocated, but I've never heard him advocate violence. His actions have been nonviolent, including his contempt of court convictions for refusing to leave the flawed kangaroo court trial of Leonard Peltier and including his participation and arrest in the campaign to stop the Diablo Canyon nuclear power plant--one of those we now finally worry about as just as vulnerable as Fukushima ever was. 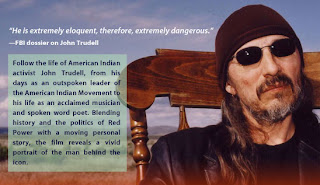 So my then-nine-year-old son and I heard Trudell the next year, in 1980, and his powerful talk about our responsibilities as humans in Creation has stayed with me ever since. He was so exasperated by the end of his talk he paused and simply said, "The problem is, we gotta straighten up."

We are still thinking about it, John.
Posted by Tom H. Hastings at 3:41 AM