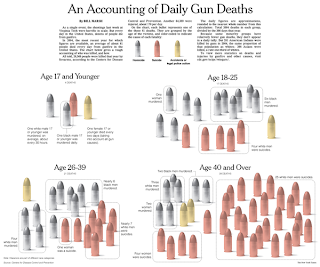 Bannon and Collier (2003, p. 1) set the stage for discussing the public health threat of civil war in general:

Civil wars bestow most of the suffering on noncombatants, who tend to have little say in whether the conflict is initiated or if and when it is settled.

But humankind almost seems to be waging a transnational civil war at all levels and driven by many ideologies, mostly fueled by handguns and hatred. The tragedy in Norway is the latest utterly senseless example.

Oh, say the gun lovers, I suppose you'd outlaw fertilizer, since that was the main component of the bombs planted. No, of course not. Fertilizer has a peaceful use. It is made and sold globally with the intention of making plants grow, of producing more food from our good Earth (even though, yes, I personally prefer organic produce for the good of the Earth and our health). Outlawing fertilizer is a different conversation.

But it is time for humans to give up the gun. All humans, all guns. Would Gandhi have shot a gun? Dr. King had a gun until his home was bombed, which is when he sat down, thought it through, and threw it away. The notion that we have some right to these abominable tools comes in a distant second to the rights of all humans to life. Guns are made to kill. Killing is wrong. The vast majority of those killed with guns are innocent, are civilians, and do not deserve to lose their precious lives.

We can teach gun safety, it is claimed. True. That is irrelevant. I'm sure most mass murderers know gun safety practices.

We won our freedom with the gun, many say. No, we won our freedom because we collectively decided to be free no matter how steep the cost. Freedom is no more won with the gun than with Facebook or a phone tree. The tools are not the home and there are many ways to build the home. A home built with nonviolence will be one in which civil rights, human rights and democracy do better. The history is clear. Gandhi used nonviolence to evict an occupier. Dr. King used nonviolence to gain civil rights. Filipinas used nonviolence to stop a civil war and regain their democracy. Many labor unions have used nonviolence to win gains. We all use nonviolence daily to negotiate with everyone in our lives. The three times I had a gun pulled on me and pointed at me I would almost certainly have died if I had myself had a gun and pulled it out. I negotiated my way out of it every time and lost nothing of real value.

Stopping military aid, gun sales, and shutting down our weapons industries would not stop all violence, but it would save millions of lives every year. Understanding these godawful things in the context of a cost-benefit analysis, acting with a good human conscience, and making a bold decision as a species is both possible and vastly superior to what we do now.

Am I conflating many issues and subtopics? Yes and no. It always seems that way when we hear a radical proposal and that is what I make. But can we not make some radical changes toward the good? War and mass murder of all sorts are radical changes toward the bad, from Oslo to Kandahar. Meeting radical evil with pusillanimity is not adequate; it is time to apply what Gandhi called soulforce. That is radical and humankind could benefit from that sort of radical change.