We are quite excited all too often to go teach the world, go save those poor benighted indigenous peoples who need our wisdom, our tutelage, our scientific and verified knowledge. How else can they catch up?

If you see a train heading straight for a cliff, would you run hard to catch up to it?

Although many of the recent theories and practices of conflict resolution may have been articulated more vociferously in the West, their deep roots reach into far older world traditions from which they draw their inspiration (p. 7).

Conflict resolution offers a wonderful braided path leading out of the war system horrors toward a world in which we invest in life-affirming and life-enhancing services. Humble facilitators go places and elicit as much as they impart. They collaborate, learning first and collaborating in an adaptive synthesis that uses the eclectic best from East, West, South and North. It is sustainable, it is strategic, and it is always in the enlightened self interest of all societies.

But first some investment is indeed required. As Melanie sang,

Instead of always sending out experts to teach, let's invest in sending experts out to learn together. Then take a few $billion from the military to meet human needs, including an elevated education in nonviolent conflict management methods, taking the strongest techniques from all cultures, privileging all rather than just a few that have shown that they can dominate others. 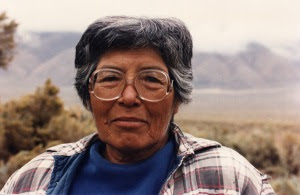 One of my favorite people is Carrie Dann. She is a Western Shoshone elder and when a young angry Native American man said that it's time to start an armed uprising to defend Native land and rights, Carrie, a tiny woman in her 80s, said, "You need to watch the movie Gandhi." Carrie has used nonviolent methods for decades, winning many indigenous rights battles against the US government. She is an exemplar of indigenous wisdom, teaching her own and others too. She is the sort of voice our young experts need to hear. Learn from Carrie, integrate her wisdom into your knowledge, and then head to Liberia or Nepal to learn from those people and bring along your tempered and humble knowledge from the academy and from the fonts of ancient wisdom all around us.